← Back to blog posts
In the industry
June 30, 2022
Link copied to clipboard

How are security tokens and cryptocurrency related? Are digital assets and tokenized securities the same? Find the answer to these questions and more in this blog post on defining security tokens. 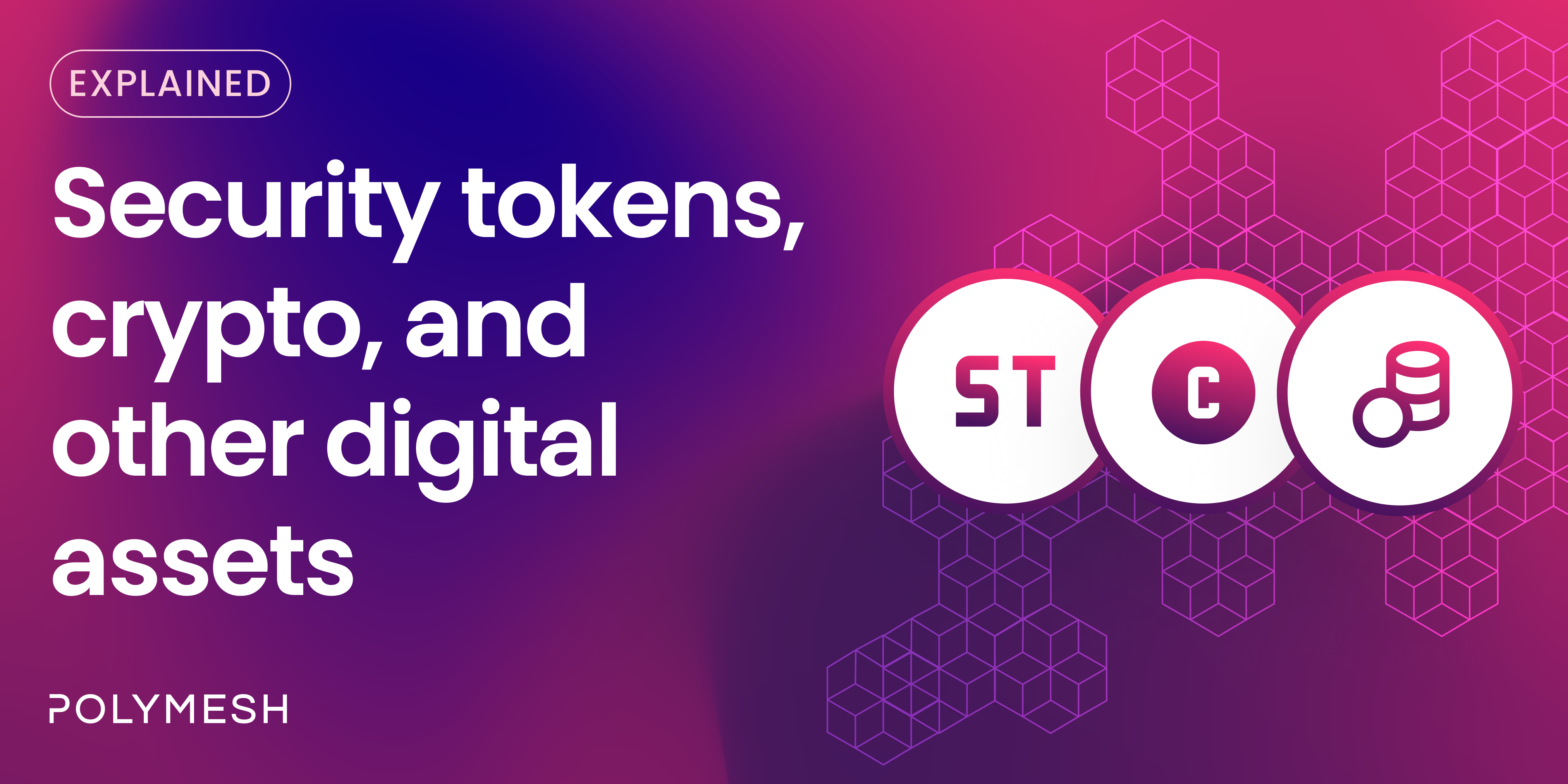 By now, “crypto” is a common household word. Popular social icons tweet about it, investors rave about it online, and many digital banking apps display a list of crypto for purchase on their front page.

But the same can’t be said for blockchain, security tokens, or digital assets. While almost everyone has heard of cryptocurrency, when asked if they know what blockchain is, many will reply with “what’s that?”.

If that sounds like you, don’t worry! This blog post has you covered. By the end, you’ll be brushed up on the basics of blockchain, security tokens, crypto, and other digital assets.

Blockchain is a form of distributed ledger technology (DLT), which is when a digital database is shared and synchronized across multiple nodes on a peer-to-peer network.

Blockchain gets its name from the way it records data in encrypted blocks of code and chains them together. Each block contains a history of every block which came before it, as well as a timestamp down to the exact second of the transaction.

While blockchain has its origins in the invention of Bitcoin (the first cryptocurrency), the open source technology has since been replicated and developed into many different forms.

Today, different versions of blockchain exist for many types of cryptocurrencies, as well as many other applications from supply chain management to tokenized security offerings.

What is a digital asset?

This one is tricky, because there are various meanings of the word.

Broadly, a digital asset is anything stored in a digital format that comes with the right to use. It could be a photo of your dog you took on your cellphone to a movie you streamed on Netflix; a slide deck a company uses in an external presentation to a draft of a document an employee wrote just for internal use.

In some cases, digital assets make sense to represent on the blockchain. Security tokens, cryptocurrency, and non-fungible tokens are a few examples.

Why put digital assets on the blockchain?

The main benefit to blockchain is there’s no central administration. Instead, data is replicated identically by nodes containing a full copy of information, included in a timely order. When a ledger update occurs, nodes construct the transaction and use consensus to determine the correct copy, then updating themselves to that version.

This decentralization makes it possible for the ledger to be immutable, transparent, traceable, verifiable, and free from censorship by a central entity. This brings numerous benefits to participants, from reducing privacy and security risks to improving efficiency and lowering operational costs.

As an immutable ledger, blockchain is immensely useful for the financial world. It has revolutionized record-keeping by introducing the possibility for triple-entry accounting, which adds a third component to the traditional double-entry accounting system in the form of cryptographically-sealed blocks that no one entity can alter. Instead, the ledger can only be modified with the consensus of the many nodes.

Ultimately, blockchain brings transparency to the entire accounting and auditing process. As a result, it maintains integrity and protects information while reducing room for fraud and manipulation.

Not only does blockchain make processes more trustworthy and efficient, but it also has many trickle-down benefits for participants. For example, less troubleshooting for human error, less manual labour, and less time-consuming paperwork can lead to significantly lower operational costs.

A cryptocurrency is a virtual currency that resides on a blockchain. You’ll sometimes see it called a crypto coin or crypto token, but the two aren’t synonymous. All crypto coins are tokens, but not all tokens are coins.

Examples of crypto include bitcoin (BTC) on Bitcoin,  or ether (ETH) on Ethereum. Each of these crypto tokens is the inherent digital currency on its respective blockchain, so they’re also considered the native tokens on those chains. For this reason, they can also be considered crypto coins: they can represent a direct medium of exchange.

However, it’s possible for a blockchain to host non-native cryptocurrencies in the form of tokens on top of the chain. To understand how, you’ll need to know a bit more about tokens.

What is a blockchain token?

In the context of blockchain, a token refers to the on-chain digital representation of something of ownership (i.e. a digital asset). Because tokens represent ownership exclusivity, they’re useful mediums for exchange.

For cryptocurrency, the primary role of the token is as a means of payment. The crypto token functions like money as a unit of account, store of value, and medium of transfer. Think of it as a unit of currency like a physical coin or dollar bill that just lives digitally on the blockchain.

Tokens are also highly useful mediums to represent rights to goods and services. For example, POLYX provides token holders with a means to pay transaction fees on Polymesh. That said, there are other uses for tokens beyond currency.

What are the different types of blockchain tokens?

Not all tokens are designed to represent money or be used as payment. Other common token types include utility tokens, security tokens, non-fungible tokens, reward tokens (e.g. POAPs), governance tokens, and non-monetary transactional tokens (e.g. in a supply chain).

We’ll define a few of these (utility tokens, security tokens, and non-fungible tokens) in this blog post. Note that when it comes to classifying token types, however, the line is blurry. That’s because blockchain is a new technology and there are new classifications constantly being introduced as the space evolves. Tokens don’t always fit neatly into one category.

For example, POLYX is a utility token and USDC is a payment token, but USDC could theoretically be classified as a utility token as well because like POLYX it provides the token holder with utility access. For POLYX, this utility is in access to services within the Polymesh ecosystem itself, while for USDC, utility is tied to the real-world redemption for US dollars.

Moreover, token types can differ vastly even between themselves. For example, a utility token can also be a governance token if it gives the holder voting power. This is the case for POLYX, which enables token holders to participate in on-chain governance on Polymesh.

What is a utility token?

When Ethereum launched in 2015, it popularized the use of smart contracts, programmable self-executing code that can enable transactions to transpire without an intermediary. Smart contracts made it possible for non-ETH tokens to reside in the existing blockchain ecosystem.

Suddenly, many tokens were being created on the blockchain that could interact with its protocols. Called utility tokens, these tokens brought value to the holder by giving the token holder the right to a service or product.

From ICOs to STOs

The possibility for blockchain to host non-native tokens has wide implications for blockchain and finance, because it means blockchain can be used for more than just a singular virtual currency system.

With cross-chain smart contracts and chain interoperability, it’s even possible for multi-chain ecosystems to evolve, where the applications on different chains can interact and transact with each other.

This led the inventors of Polymesh and other industry leaders to think of new uses for tokens beyond digital coins. Since the blockchain can move tokens so frictionlessly to the point of enabling instant settlement, it has valuable applications for any asset which can held and traded. Why not utilize the technology for tokenized securities?

What is a security token?

A securitiy is a financial instrument that represents ownership interest in an asset. A security token is just a security that’s been created on the blockchain.

The process of representing securities (or any other digital asset) on blockchain is referred to as tokenization. Financial products like private equity, debt, and bonds make prime candidates to become tokenized securities, but there are tons of other possibilities too.

When it comes to tokenized securities, Polymesh has witnessed interest from companies wanting to tokenize everything from equity, bonds, and funds to physical assets such as ships, racehorses, and land.

One of the major benefits to blockchain is that it also makes possible the fractional ownership of traditionally illiquid assets. Real estate is a commonly cited example, but the case exists for private placements, fine art, intellectual property, and synthetic asset baskets, among many others.

You can learn more about security tokens here.

If by ‘crypto’ you’re talking about crypto assets, then yes. Technically, security tokens are crypto assets (digital assets that exist on blockchain).

If you’re talking about cryptocurrency, the answer should be abundantly clear by now. Security tokens and cryptocurrency are related in that both are blockchain-enabled financial instruments, but they’re about the same as comparing a crumpled dollar bill to a luxury penthouse apartment.

For more on security tokens and their benefits, click here.

To learn how security tokens are created and traded, check out this blog post.