Polymesh is a public permissioned blockchain. Anyone can see the public state secured by the network, but for any on-chain participation, you'll need to complete an identity verification check first.

What is a permissioned blockchain?

On permissioned blockchains, a control layer runs on top of the chain and acts as a gatekeeper, authorizing participants' access to the blockchain and governing how they'll interact with the network.

How does a permissioned blockchain work?

A permissioned blockchain involves identity as an entry prerequisite. Participants must provide a known identity for the control layer to authenticate and bind to their digital identity. From there, it authorizes them to perform specific actions on the network.

Who needs to be permissioned?

Permissioned blockchains vary. On Polymesh, every user must have a verified identity–whether issuers, investors, node operators, or stakers. This enables the blockchain to meet capital market requirements around identity and compliance.

Public permissioned blockchains bring the best of both worlds

As a public permissioned blockchain, Polymesh combines a permissioned onboarding system with a public, decentralized network.

The result? A blockchain which offers the best of both worlds, enabling higher trust in the network without compromising on transparency.

The key to problems with identity and compliance

Previously, it wasn't possible for financial institutions to safely take advantage of the benefits of public blockchains. It just wasn't worth the risk as a permissionless blockchain can't verify its network participants aren't on a blacklist or help participants meet complex requirements and KYC obligations.

With Polymesh, institutions no longer need to rely on a private blockchain for identity and compliance, or worry about the risks of permissionless blockchains.

As a public permissioned blockchain, Polymesh provides institutions with the confidence they need to engage in public blockchain infrastructure. When a user's identity is verified during onboarding, an identity attestation is attached to their account which allows them to participate on-chain and can be leveraged for automated compliance.

The unique benefits of a public permissioned blockchain

As a public permissioned blockchain, Polymesh enables market participants to capture unique benefits of blockchain technology, offering trust in the network without compromising on transparency.

On Polymesh, every user must become verified with a customer due diligence provider, regardless of how they plan to interact with the blockchain. Issuers and financial intermediaries may examine the blockchain to confirm questions regarding participant identities.
‍
Identity on Polymesh improves security and compliance. Polymesh token holders can only act with their on-chain identity, referenced by a decentralized identifier (DID). They can't use multiple identities to subvert rules.

On-chain governance prevents hard forks and guides the evolution of the chain. On Polymesh, governance is democratic; every user can have their voice heard and impact change on the network by submitting or voting on a Polymesh Improvement Proposal (PIP).

To prevent processes becoming too lengthy or latent and ensure emergency fixes are possible, governance is overseen by a small decision-making body, the Governing Council, which has the power to fast-track proposals. Its members are decided upon by vote.

Node operators must have a known identity, facilitating better regulatory compliance. Meanwhile, entity- and identity-level compliance can be easily automated by leveraging Polymesh's Unique Identity System (PUIS), with attestations added as needed. As a result, on-chain compliance implementation is possible.

Polymesh allows issuers to customize an array of compliance rules to suit their needs. Even complex requirements can be automated efficiently and cost-effectively.

The limited number of nodes who can write new blocks to the chain improve its performance by removing unnecessary computations required to reach consensus. This makes the blockchain less costly and more energy efficient than other chains.

At the same time, decentralized nodes give the network increased system reliability since no single central server needs to handle all processes.

It's easy to manage and implement crisis operations on Polymesh as the number of operator nodes is fewer. Likewise, less time is needed to update rules over the network and upgrades are considerably faster than on other networks. Two things make this possible on Polymesh: Polymesh's on-chainmodel and the underlying Substrate framework, which enables seamless upgrades on the blockchain.

Blockchain can maintain a perfect digital record of ownership and of transactions, but true trust can only be guaranteed if the network is transparent. As a public blockchain, there's greater transparency with Polymesh because the blockchain's data is openly accessible and shared. It's also immutable in that it can't be unilaterally modified by one entity or a cartel of entities; it can only be modified with the consensus of the community.

Polymesh is cost-effective even though POLYX is needed to incentivize nodes. That's because POLYX supply approaches an asymptotic limit. Newly minted POLYX created for block rewards is capped at 14% of the total supply and eventually fixed at 140 million annually once the supply reaches 1 billion POLYX. This prevents continuous acceleration of inflation and keeps transaction costs proportional to the cost of operations.

Decentralized nodes create less susceptibility to attacks compared to a centralized system, where only one server needs to be attacked for the entire system to be compromised.

Trust in the network

Decentralized nodes reduce the privacy and security risks associated with relying on one central intermediary.

Since node operators are permissioned, they have higher incentive to work together and update the network. Polymesh's nominated proof-of-stake consensus mechanism incentivizes them to behave by making attacks or poor behaviour considerably costly.

Polymesh is a public permissioned blockchain that requires a verified identity for each participant, from issuers and investors to node operators and stakers.

Permissioned for every participant

As a public blockchain, anyone can check the state of the network.
‍
Similarly, anyone can use Polymesh to create and issue security tokens, participate in staking or governance, or run a regular node– you just have to verify their identity first with a third-party customer due diligence provider. 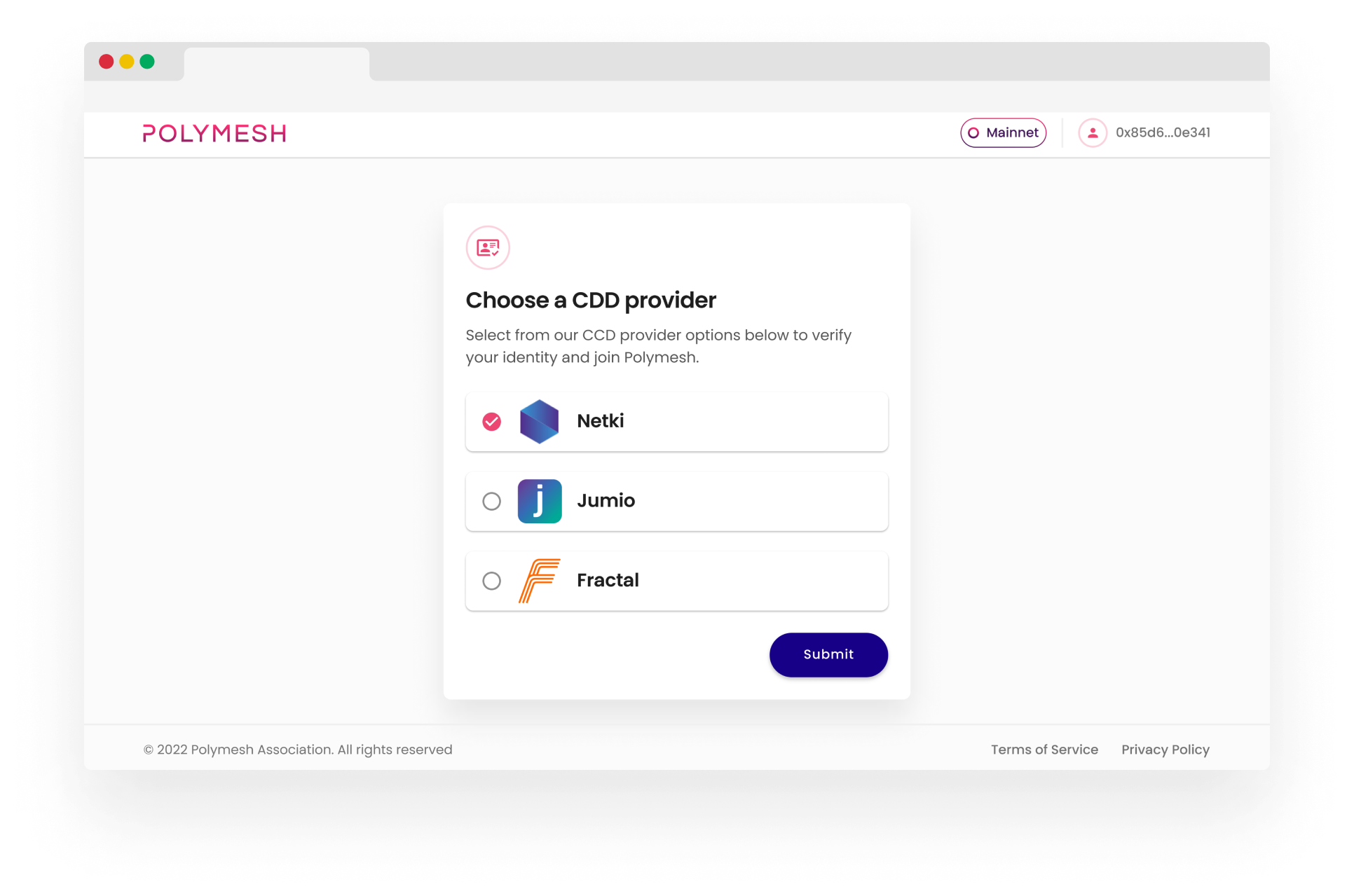 Only licensed financial entities can become node operators on Polymesh and run nodes that write new blocks to the chain or vote on block finality.

Node operators on Polymesh are permissioned through on-chain governance and must complete a verification process. 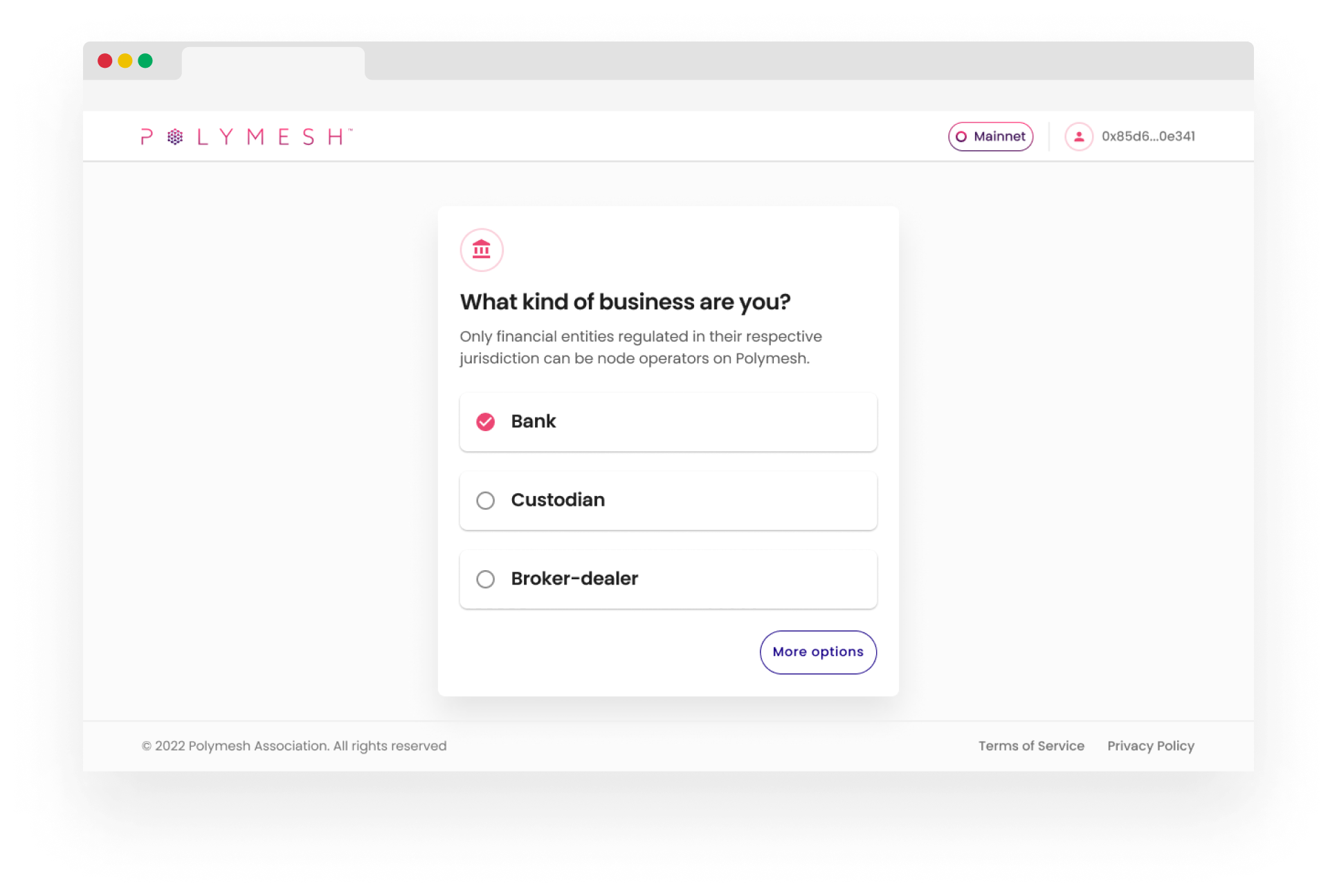 How is Polymesh decentralized?

Polymesh prioritizes fostering community development. The blockchain is decentralized, open-source, and community-focused, with oversight by the not-for-profit Polymesh Association.

While only licensed financial entities may become node operators, anyone can see the ledger, participate in the network, or run a regular node. Node operators are permissioned by Polymesh governance.

Polymesh governance is on-chain and democratic. Every member of the community can have their voice heard and impact change on the network by putting forth Polymesh Improvement Proposals (PIPs) or voting on other PIPs.

For a public permissioned blockchain to truly be public, it's important that there aren't any extra barriers preventing participation like pricing. Polymesh technology is completely free to integrate and low-cost to operate.

The Polymesh Association also has a Grants Program for offering grants and incentives to developers building features and functionality on Polymesh.

How does integrating with Polymesh work?

Unlike with other permissioned blockchains, integrating into the network isn't a challenge for Polymesh.

As a layer-1 blockchain with financial primitives built into its core, Polymesh provides full functionality for identity and tokenization, with no further blockchain code required. As a result, implementation on Polymesh is incredibly easy.

To ensure the community feels well-equipped and capable of building on the blockchain, there's tons of information on how to integrate with Polymesh. Interested developers can utilize our Github, the open-source Polymesh SDK library, and the resource-heavy developer portal. They can also get direct help from the community in our Discord.

For ideas about what you could build, check out the Polymesh blog.