← Back to blog posts
Learning
January 18, 2023
Link copied to clipboard 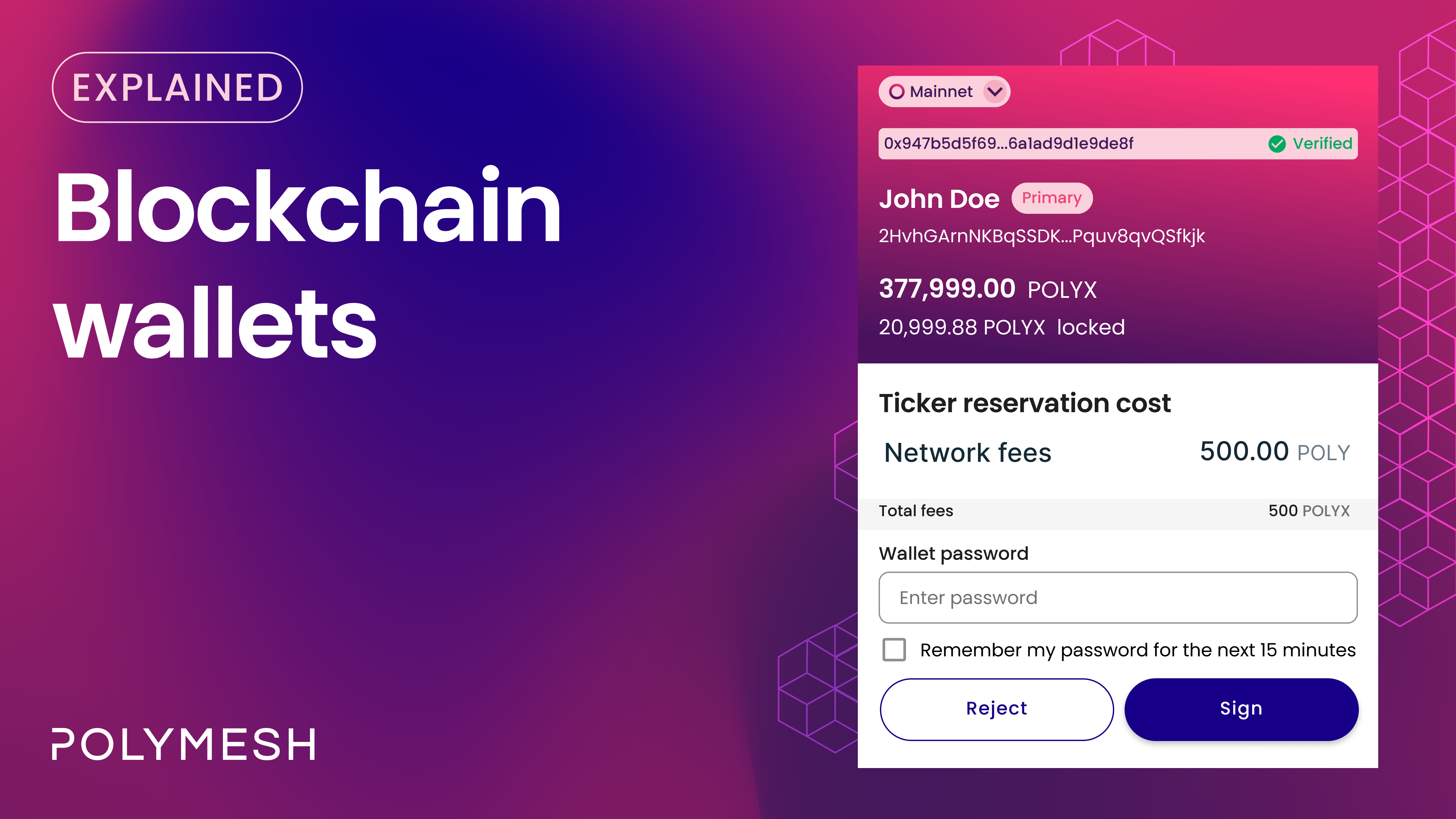 To hold blockchain-based cryptocurrencies, NFTs, or utility tokens such as POLYX, you’ll need a blockchain wallet.

Without your private keys, you can’t access your tokens. That’s why it’s critical to understand how blockchain wallets work to safeguard crypto.

What is a blockchain wallet?

A blockchain wallet is a digital wallet that allows users to store, send, receive, and manage blockchain-based cryptocurrencies and other digital assets.

Depending on the type of wallet, you can also use wallet infrastructure to track and monitor the value of your crypto assets. Some software wallets also come with integrated APIs to pull data from other platforms or perform charting and market analysis, as well as track prices for various crypto assets.

Some blockchain wallets such as the Polymesh Wallet can only host assets that reside on Polymesh. Other wallet types are integrated with multiple systems and can be used to host multiple assets on different blockchains.

Another feature of some wallets (also supported by the Polymesh Wallet) is the ability to create multi-signature addresses, which can require two or more parties to have private keys and sign a transaction for it to be accepted as valid.

Why use a blockchain wallet?

Another major benefit of blockchain wallets concerns crypto custody. With a blockchain wallet, users can manage and safeguard crypto assets themselves, reducing the risk of data jeopardization, manipulation, and corruption that can occur when accounts and balances are maintained across multiple systems as they are in traditional banking.

However, there are crypto custody options available for users who prefer not to take on the responsibility of managing their keys themselves – for Polymesh users, third-party custodial wallet provider DFNS provides a bank-grade custody infrastructure featuring keyless custody. Users can generate wallets at scale, manage configurable accounts, sign transactions at high speed, set up business rules, monitor network status in real-time and more without worrying about losing their private key.

How do blockchain wallets work?

Blockchain transactions are kept secure by being cryptographically signed. It’s the wallet’s job to sign transactions on behalf of its owner via cryptographic keys that identify the user and give access to their account and its value.

Normally when a wallet is created, it provides an ID that enables the tracking of all transactions associated with that ID. This is the blockchain wallet address, which is hashed via cryptographic algorithms with a public key (used for requesting or receiving funds; functions like a username) and a private key (used for functions like a password).

It’s important to never share your private key as this is what’s needed to manage the movement of your crypto assets on the blockchain. If someone has access, there’s a high possibility your account can be compromised and your tokens lost forever.

The best blockchain wallets are easy to use, highly secure, use minimal intermediaries to allow for instant transactions, and employ some form of two-step authentication (e.g. password and one-time authorization code; seed phrase and passcode).

Wallet infrastructure comes in various forms, from hardware wallets such as Ledger to mobile software applications such as Nova Wallet.

Each type comes with its own benefits and tradeoffs. For example, offline or “cold” wallets make it harder for hackers to digitally intercept transactions or hack private keys, but users risk complete loss of funds if the wallet is lost or destroyed. Conversely, keeping private keys online in “hot” wallets offers more convenience but limits your cryptocurrency security to the security of the wallet provider.

Hardware wallets store a user’s private keys offline in portable thumb-drive devices (similar to USBs) that can be connected and plugged into the user’s computer. Hardware wallets work by maintaining keys and signing transactions offline, then disclosing this information online.

Hardware wallets offer high security as keys can be stored offline and in a safe place outside of when a user wants to transact with their tokens. This protects a user’s wallet from unauthorized digital access such as hacking or other online vulnerabilities.

Because of the extra step involved in using the offline device, hardware wallets make transactions more tedious than software wallets, with which transactions can sometimes be executed with a single click of a button.
‍

Software wallets are maintained in the cloud or internet and offer the advantages of faster transfers, 24/7 ease of access (sometimes from multiple devices), and convenience. However, this comes at the cost of higher susceptibility to inference from malicious hackers and other online security vulnerabilities that could lead to unrecoverable theft or loss of crypto assets.

A third type of wallet is a paper wallet, where keys are written offline on a physical medium such as paper. While this makes it harder for malicious users to digitally hack your private keys, we caution using a paper wallet owing to the fragility of the medium. Further, there can be risks involved in the process of generating and printing them as well as mishandled change addresses.
‍

As technology advances and innovation in blockchain increases, wallet infrastructure and crypto custody will keep improving. We can expect new types and features of wallets in the future that better balance crypto security with convenience as well as offer other functionality. For example, a few software wallets have begun offering social features such as email or chatting, status posting, account following, and transaction tracking including reading history.

What blockchain wallets work with Polymesh?

If you just want to hold POLYX, any wallet that’s compatible with Polymesh and has an associated on-chain identity will do.

If you want to interact with security tokens on Polymesh, you’ll need a wallet funded with POLYX and your own on-chain identity.

When you complete Polymesh onboarding to create an on-chain identity, you’ll have the choice to connect to the Polymesh Wallet chrome extension or manually enter an address for an alternative, such as a third-party Substrate wallet or custodial wallet.

The Polymesh Wallet is a Chrome Extension that looks like this:
‍

All the information you need to know about Polymesh wallets, address, and keys can be found at polymesh.network/wallet.