Letter to the Community: Celebrating 1 year of Polymesh Mainnet

The Polymesh mainnet’s first year brought over 3,000 users to the blockchain built for asset tokenization alongside a wide array of participants supporting the security and growth of the ecosystem. 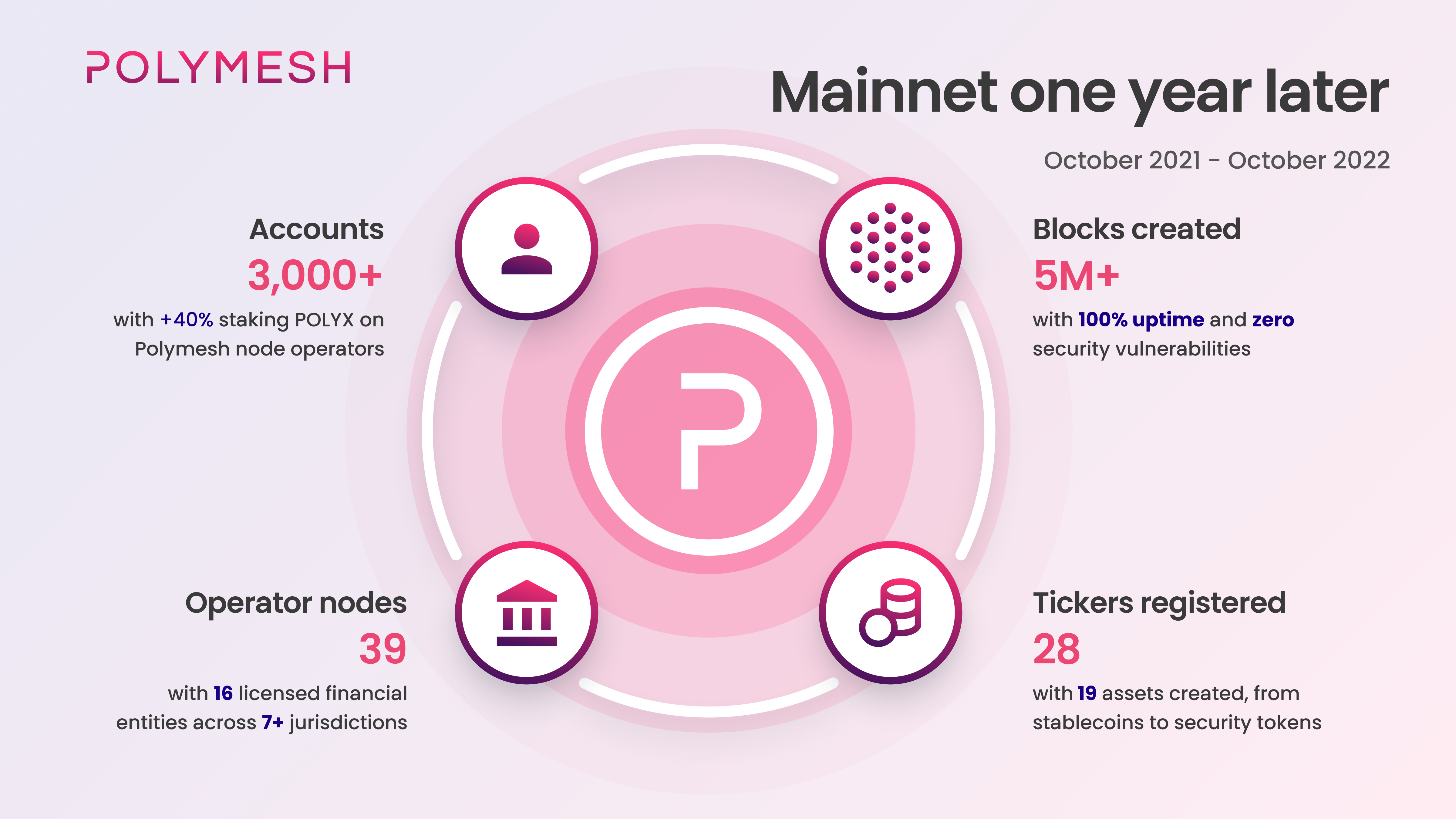 Polymesh mainnet has officially turned one year old, and its first year in operations has been wildly successful!

Polymesh’s genesis block launched on October 28, 2021. Now one year later, more than 5 million blocks have been written to the chain. Throughout this time the network has experienced 100% uptime with zero security vulnerabilities, showing a strong and secure network as needed for regulated assets.

Let’s take a look at some of Polymesh’s major achievements!

From October 2021 to October 2022, Polymesh saw 3,000+ verified users successfully onboard to the network from all across the globe. Almost half of these users are participating in staking POLYX to help secure the network, proving that the Polymesh community is actively involved in the success of the chain.

The Polymesh onboarding system is working smoothly thanks to the dedication of the third-party customer due diligence providers. One of these (Jumio) was added after Polymesh’s launch, and we expect we’ll see more companies performing KYC for Polymesh in the future.

Crucial to Polymesh’s operations and security is the native token POLYX.

The POLY:POLYX Upgrade Bridge went live shortly after Polymesh mainnet as the main mechanism to generate POLYX. Watching the amount of POLY upgraded to POLYX grow is one of the most exciting ways we’ve monitored community support for Polymesh. To date, almost 50% of existing POLY (almost half a billion!) has been upgraded to POLYX in over 1,000 bridges, showing that a strong number of the community backing POLY believe alongside us in the purpose and potential of Polymesh.

At the time of writing, POLYX’s circulating supply is 520242752.993196. Almost 50% of that (~to be exact) is locked for staking, suggesting that a large percentage of POLYX token holders are dedicated to the chain’s long-term success.
‍

‍
When Polymesh launched, the only way to hold and custody POLYX was through the Polymesh Wallet. We’re happy to say that a year later, various options exist for token holders to manage their keys and look after their POLYX, from using Ledger’s hardware wallet to mobile crypto wallets like Nova Wallet, or even a third-party custody provider such as DFNS.

We expect more POLYX-related integrations to come, especially as the utility token and the opportunities it grants to token holders become more known.

Polymesh launched with 14 regulated financial entities running operator nodes, and interest was so high that the maximum operator node count was changed from 40 to 50 only a few months later. To date, there are 16 node operators from across 7+ jurisdictions running 39 nodes. The mix features custody providers, investment banks, exchanges and trading platforms, brokerages, venture capital companies, and other financial players.

As Polymesh’s ecosystem grows, we expect to see more companies express interest in becoming a node operator, whether it’s to help offset the costs of the platform for large asset tokenization projects or simply as a way to participate in the leading blockchain for regulated assets.

The Polymesh ecosystem has been witnessing exponential growth from increasing numbers of individuals and companies interested in building on or integrating with the blockchain. A few of the recent highlights we’ve shared include:

Let’s not forget our friends at Polymath, who recently unveiled a new capital platform for digital asset investing on Polymesh.

Of course, not every integration is made public immediately. There are many exciting projects in the early phases or being kept hush-hush that we know the community will be thrilled to eventually hear. For now, here’s a glimpse at the Polymesh ecosystem:
‍

The increasing functionality and applications built on Polymesh can be attributed partly to the two incentive programs the Polymesh Association launched this past spring:

However, we recognize that expanding the Polymesh ecosystem doesn’t necessarily mean building. While there isn’t a formal incentive program for non-developer work, the Polymesh Association is open to rewarding community members who demonstrate a successful contribution to the ecosystem in other ways. If this is you, get in touch!

Polymesh’s upgrade to 5.0.3 was especially eventful. Alongside added functionality such as asset metadata and removed limits on secondary keys, the 5.0.3 release brought smart contracts to Polymesh, opening the door to what’s possible on-chain.

With smart contracts, users can build whatever functionality they desire from within the base layer of the blockchain. Smart contracts can unlock new potentials for innovative DeFi apps on Polymesh (such as decentralized exchanges or automated market makers)... as well as exciting use cases such as crypto tokens or NFTs.

The next focus, aside from assisting entities with integrating Polymesh, will be on NFT support and introducing MERCAT for private transactions.
‍

There is tons to be optimistic about from the first year of the Polymesh mainnet. A huge thank you to the Polymesh community – whether OG long-time supporters or eager new names/faces – who have been pushing P along the way!

You’ve helped us achieve some of the above, whether through promotional efforts, on-chain actions, user feedback, or keeping spirits high with a constant stream of fire memes. Thanks to you we’ve also met some online milestones, including:

And we’ve been able to host some pretty awesome Ask Me Anything’s (AMAs) with insightful questions about Polymesh, security tokens, integrations, industry developments, and more… with our best one yet happening today!

Join us live in commemorating Polymesh’s one year anniversary in our celebratory AMA:
‍

Stepping into the second year

Both the Polymesh team and community have been hard at work bringing Polymesh to the forefront of asset tokenization. As Polymesh steps into its second year in operation, more results from these efforts will materialize – we’re just getting started!