How to issue security tokens on Polymesh

A brief guide on how to issue security tokens on Polymesh, depending on your comfort with code as well as your and your clients’ needs. 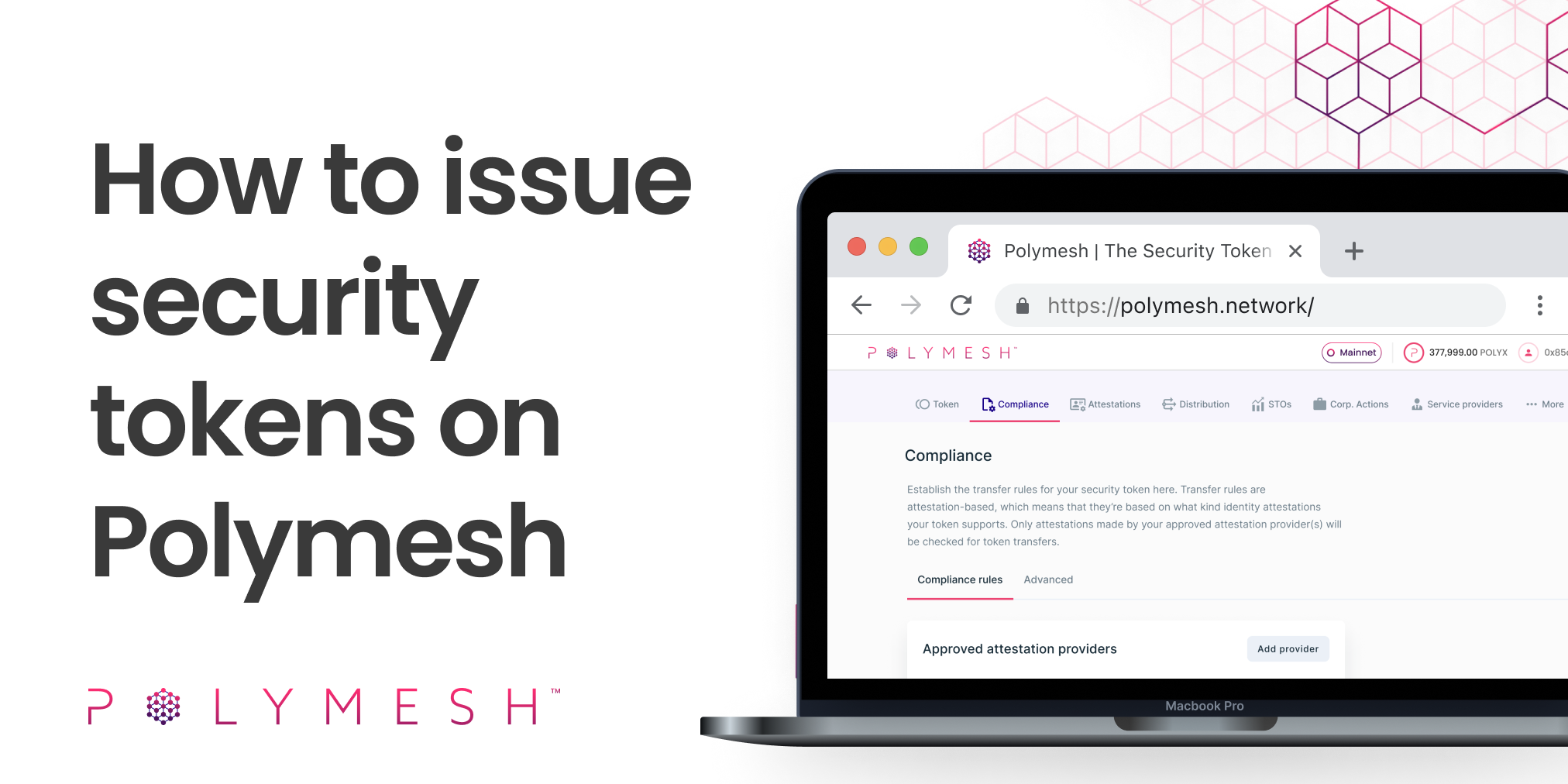 One of Polymesh’s unique attributes is that it’s a layer-1 blockchain built with financial primitives. Built into the core of the chain, these primitives provide full functionality for the issuance, compliance, settlement, and lifecycle management of security tokens– no further code or smart contracts required.

Because of its financial primitives, security token issuance on Polymesh is incredibly easy, as is integration with third-party decentralized applications (dApps).

In the developer portal, you’ll find guides, documentation, and everything else you need to know about how to issue security tokens on Polymesh.

But if you’d prefer a brief overview first, this blog post is for you!

How to issue security tokens on Polymesh: the 3 options

Issuers have three options when it comes to creating and managing security tokens on Polymesh:

Option #1 (using an existing tokenization platform) is the quickest, and the only option which won’t require a developer. Option #2 (plugging directly into the blockchain with the SDK) is convenient for developers looking to integrate with in-house systems. Option #3 (build a white-label token manager) takes it to the next level with a completely new tokenization workflow to white-label and use for your own tokenization products.

The quickest way to create and manage security tokens on Polymesh is with an existing tokenization platform such as Polymath’s Token Studio. This is the best choice for issuers who want an easy, no-code approach.

Token Studio is the first-ever interface for issuing security tokens on Polymesh. Developed by the same team who architected Polymesh, the platform accounts for the intricacies of the blockchain and packages them into a simple, intuitive user interface.

Token Studio easily facilitates the entire tokenization journey, from asset origination to the management of tokens that can trade on secondary markets. Use it to create and issue security tokens, automate and enforce compliance, manage token distribution, execute corporate actions, and more.

‍Visit our developer portal to learn more, or watch our quick demo to see Token Studio in action.

Option #2: Plugging directly into the blockchain with the SDK

If you’re a developer and fluent in programming languages Typescript or Javascript, you won’t need a tokenization platform to interact with Polymesh. Instead, you can plug directly into the blockchain via the Polymesh SDK.

The Polymesh SDK is a library of tools that enables developers to build powerful applications that interact with the Polymesh protocol. It focuses on abstracting away all the complexities of the blockchain and exposes a simple but complete interface. The result is a feature-rich, user-friendly node.js library.

Since the SDK will be familiar to developers even of non-blockchain applications, it makes for easy integration into existing systems. Plenty of information, docs, and tutorials can be found on the developer portal.

Option #3: Building your own token manager

Instead of using an existing tokenization platform, issuers can build and white-label their own token manager to be customized with their unique branding and desired features.

Building a white-label token manager involves building your own tokenization workflow using the Polymesh SDK. It’s an ideal option for companies looking to offer their own tokenization products to their clients as it provides more functionality and customization than is possible on existing platforms.

Issuers can choose which features Polymesh provides to include in their offering, while hiding the blockchain from their clients if desired. Everything from which functions are surfaced in the token manager to logos and colors are within the issuer’s control.

How Polymesh can help

At Polymesh, we prioritize fostering our community. That’s why we released our Grants Program: to give back to developers helping us extend the Polymesh ecosystem. If you’re thinking of building on Polymesh, don’t forget to apply!

To ensure the community feels as equipped as possible, there's tons of information on how to easily use or integrate with the blockchain.

The developer portal is the perfect place to discover the open source Polymesh universe– we have guides, documentation, tutorials, demos, and tons of information on the Polymesh SDK. For even more technical resources, check out Github.

For support issues, browse the community forums or reach out directly by submitting a ticket.

Finally, if you’re thinking of building a tokenization product (or any other integrations) on Polymesh, let us know! We’re here to help.