← Back to blog posts
Community
April 5, 2022
Link copied to clipboard

Introducing Adam Dossa, Head of Blockchain at the Polymesh Association

Adam Dossa joined the Polymesh Association as Head of Blockchain in February 2022. These are his reflections on his experience front-running the engineering of a layer-1 blockchain for securities. 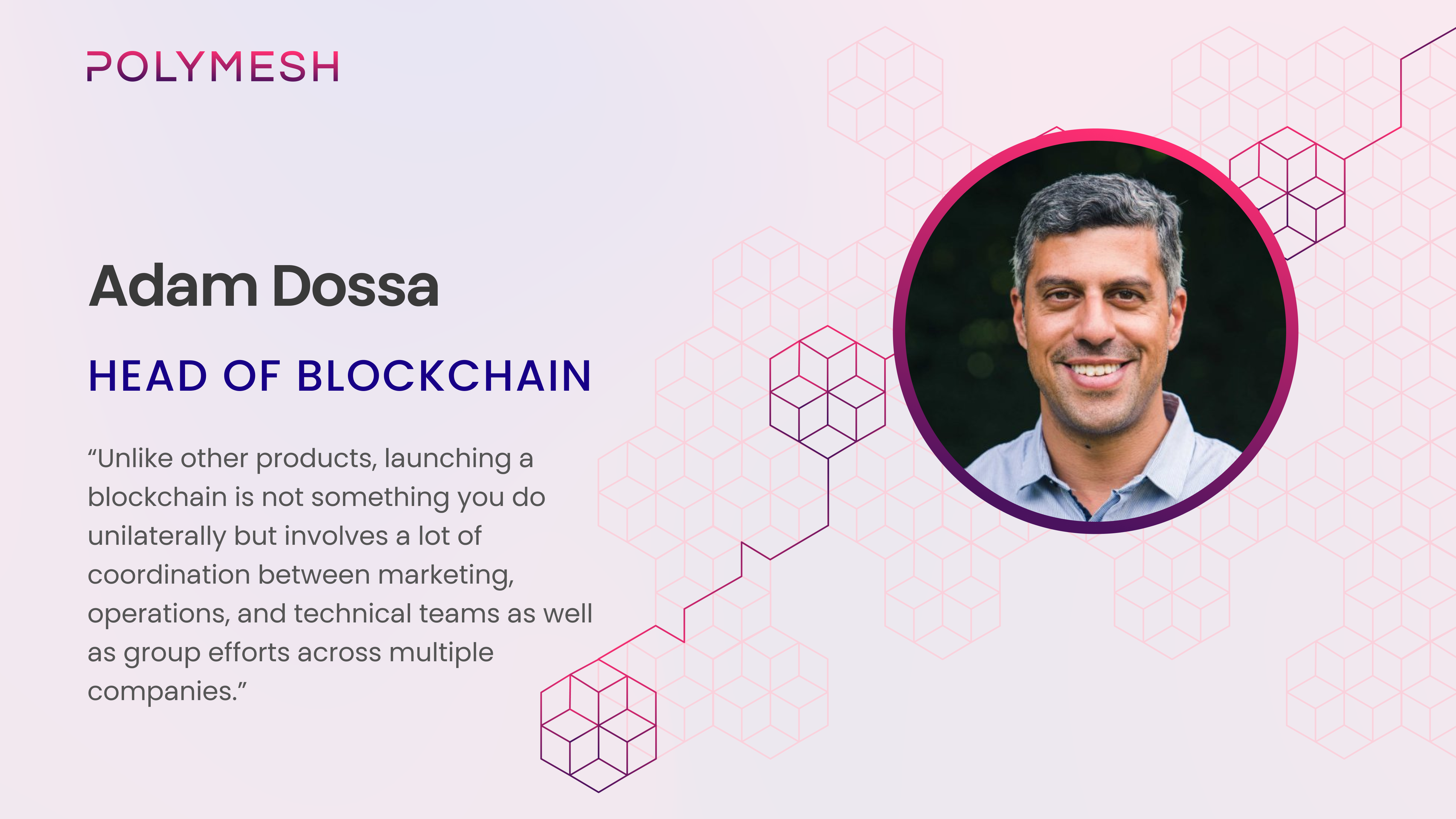 This blog post introduces the Polymesh community to Adam Dossa, Head of Blockchain at the Polymesh Association.

Read on to hear Adam’s take on what working in a blockchain company entails, what kind of unexpected challenges the team experienced with Polymesh, and what he’s found positively surprising about the space. He also shares some advice for anybody looking to enter the field!

As the then-CTO of Polymath, what was your primary focus while the team was building Polymesh?

Adam: The obvious focus more recently was on the Mainnet launch, which involves a mix of technical, marketing, and operational challenges. Most of my focus over the last few months preceding launch were on the necessary coordination required for launch. Unlike other products, launching a blockchain is not something you do unilaterally but involves a lot of coordination between marketing, operations, and technical teams as well as group efforts across multiple companies. This can be challenging and hard work. On Polymesh, we have 14 external companies running operators, along with two customer due diligence providers and the Governing Council.

In terms of writing code, I was mostly focusing on the core part of the blockchain. While I like to be familiar with as much code and infrastructure as possible, that’s the part where I’ve been most specifically involved.

What was unexpectedly challenging for you and the team?

Adam: Although I’m sure it’s an experience shared by a lot of other companies, the pandemic did bring challenges in terms of management and keeping morale up. Over the last year and a half, a team that met on a regular basis for workshops, hackathons, conferences, now had to work fully remote. When I was CTO at Polymath, we tried to address this by creating team socials, modifying our working approach, and changing our meetings to facilitate better communication. Eventually we hired a Director of Engineering to take charge of communication, coordination, and project management for the engineering teams.

A more technical challenge was running the Incentivized Testnet (ITN). The ITN was a quasi-production blockchain with close to 4,500 users, but was unique for its rewards. Imagine a normal blockchain with challenges layered on top. This gamification added a different dimension to the traditional blockchain, and making sure it was stable and secure in that environment was an interesting challenge both for myself and the company.

Can you give an example of something that needed a lot of problem-solving?

Adam: A lot of thought and time has gone into appropriately managing identity on-chain. Polymesh was designed for regulated products and markets, so identity is important, and there were some hard trade-offs involved in this. Because we’re a public chain, anyone can see what’s happening– this is by design and purpose as it helps the chain be transparent and accessible. On the flip side, you need to be careful and ensure users have an appropriate level of privacy.

Our approach was to carefully balance these different trade-offs around privacy and security. We require users to go through a light Know-Your-Client process to become onboarded (our so-called Customer Due Diligence process), but allow users to create multiple accounts on-chain. Having assets in different accounts or ‘baskets’ gives users a degree of anonymity, but from a compliance point of view, asset issuers can force investors to link together accounts as needed. For example, if an investor has two accounts in the same asset, the asset issuer can force them to declare or link together those accounts to get a clearer picture of their cap table. This gives issuers visibility into who their investors are, while investors still get opportunities for pseudonymity on-chain.

Our ‘middle way’ approach with this light KYC/CDD process is something we’re hoping to improve and evolve. For example, we’ve been working on interesting technology to improve identity management and continue to improve users’ privacy without sacrificing compliance.

Were you positively surprised by anything while building Polymesh?

Adam: Polymesh is built on top of the Substrate framework, which was built by Parity. One thing I was positively surprised by is the quality of code in that framework. We’ve been working with the Substrate framework since it first came into existence, roughly two years ago. Over time it’s evolved a lot– it’s unrecognizable from then to now– and this is challenging. If you’re building with a framework and it’s evolving, it feels like the ground is moving underneath you as you constantly need to adapt and update accordingly. But the team at Parity were great to us while building Polymesh, and we’ve been able to exchange a lot of ideas with them.

In general, there’s a great sense of community across Substrate writers. Somewhere between 50 to 100 companies are building on the framework, but whether through conferences (virtual or real), Discord, or on public forums, people enjoy helping and supporting each other. Rather than competing among projects, there’s a common feeling and idea that everyone is trying to raise awareness of blockchain technology overall. There’s a lot of collaboration and community across different teams building on the framework.

What advice would you give to someone looking to enter the blockchain space?

‍Adam: From my point of view, the blockchain space is an exciting area to work in because it combines interesting theories from game theory, economics, and cryptography, and in our case brings the financial industry into it as well. If I was to say one thing to someone wanting to join the community (and especially the technical community) who might be on the fence about whether they want to dive in, it would be that now is a great time to join the community. It has matured a lot over the last five years, from the technology and conceptual understanding to people’s approaches and attitudes. While there is the fun aspect like the memes and a lot of frivolousness, there are also a lot of companies working on serious problems. It’s a great time to jump in if you haven’t already!

I would also definitely encourage women! Unfortunately not that many women do engineering in university because it isn’t a welcoming environment, but one of the nice things about working in engineering and particularly in blockchain is that it’s quite a low barrier for entry, education-wise. Instead of focusing on your educational background, there is a much higher emphasis on what you can do (exemplified by things like your GitHub and public profile). It can even help to come from a non-engineering background since experience in other fields can be useful too.

A lot of successful people have just done a bootcamp or taken time from their evenings to dive in. There are a ton of great resources online, from educational resources to structured courses. For those who want to dive in, there are also a ton of open-sourced projects and bounties, like Polymath’s own bug bounty program. It’s also worth mentioning the wide range of roles, from those involving more design-oriented tasks to those focusing more on back-end maths.

To find out more about Adam or the other contributors in the Polymesh Association, visit polymesh.network/team.