← Back to blog posts
Community
March 10, 2022
Link copied to clipboard

Introducing Chris Housser, Head of Strategy at the Polymesh Association

Chris Housser joined the Polymesh Association as Head of Strategy in February 2022. These are his reflections on the security token industry, Polymesh, and the future of digital asset regulation. 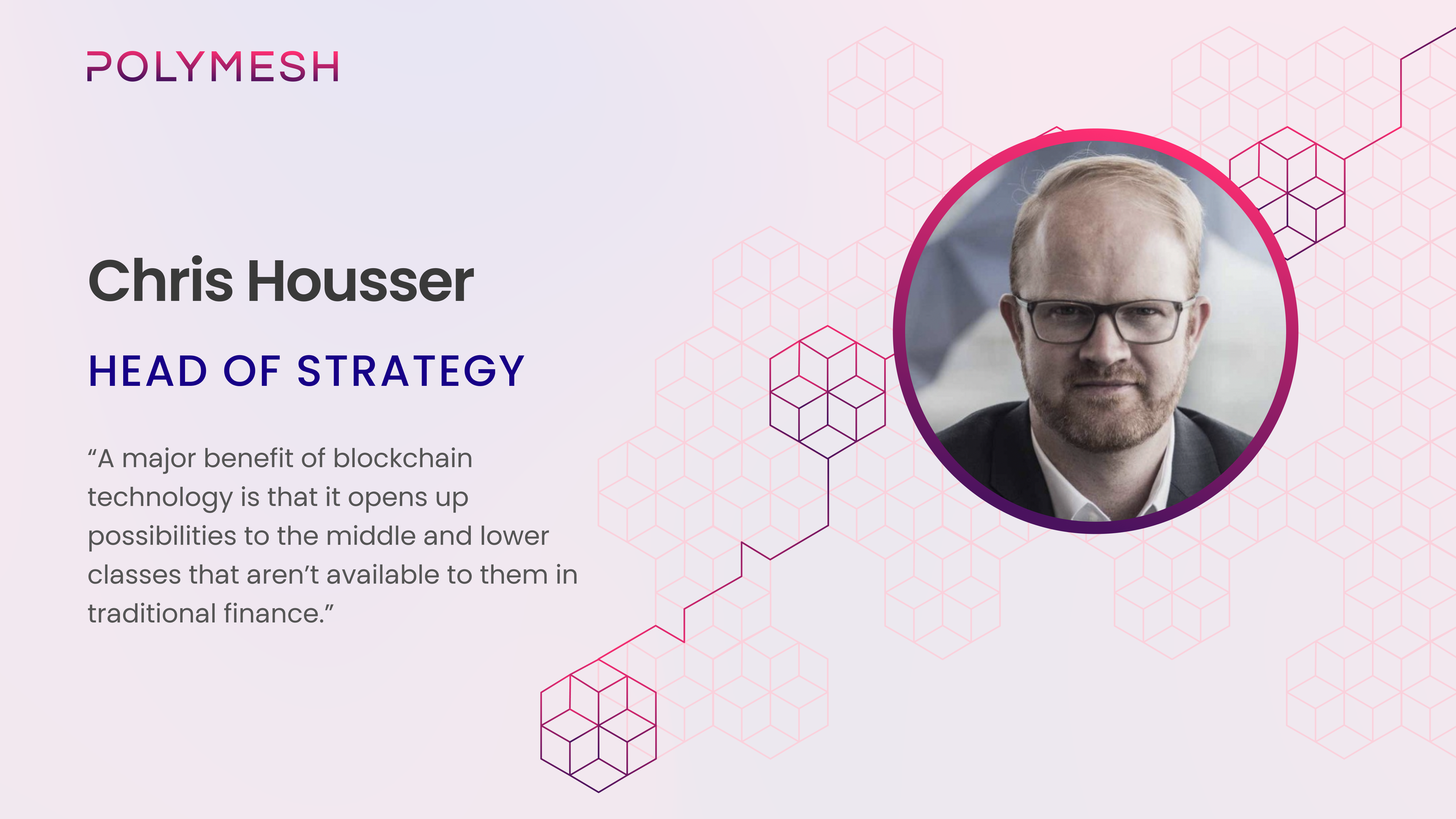 This blog post introduces the Polymesh community to Chris Housser, Head of Strategy at the Polymesh Association.

Read on to hear Chris’ take on how his vision has changed from when he founded Polymath in 2017 to now, a few months after the launch of Polymesh. He also gives us a glimpse of what he hopes to see next for the industry, and why he thinks regulators might eventually require securities to be tokenized.

How has your vision changed from when you started building security token technology to where Polymesh is now, four years later?

Chris: When we began in 2017, it was a wild time in crypto. The industry was incredibly early– and it’s still early even now. Our primary focus back then was how to help bring securities to the blockchain. We were certainly early at that stage, but what’s changed a lot over the past four years is that we’re beginning to see more institutional adoption. What was a wild idea back in 2017 is now materializing as banks, institutions, and governments are starting to see the benefits of securities on the blockchain. I think we’ve really helped to push that narrative forward, and while we’re still early in terms of what we’re trying to do, we’re definitely getting there.

Four years ago, there were not too many blockchains in existence. The main two were Bitcoin and Ethereum, which was just beginning to gain its footing. Early projects were built on top of Ethereum since it was really the only place you could go to build smart contracts at the time. Since then, a whole number of other layer-1 blockchains have been built, including Polymesh.

We built Polymesh because we saw the need for a security token solution built from the ground up as its own blockchain. Ethereum simply doesn’t have some things at its base level that security tokens require. Rather than build something to sit on top of Ethereum, we decided to build a new blockchain with all the features we think are necessary, partly based on what various institutions told us would be good to have on a blockchain that deals with things that are heavily regulated.

Now that Polymesh is launched, what do you hope to see for security tokens?

Chris: It’s been just over two and half years since we started building out our own layer-1 blockchain. When it finally launched, it felt like a huge weight was lifted off our shoulders, and everyone on the team was quite happy.

Going forward, we want to see usage and adoption. We’re in the very early days of the Polymesh blockchain, and we’ll need to prove the reliability and security of the chain. After it’s been running for a few months and recognized as secure, I would love to see companies creating tokens on Polymesh and using its diverse codebase. That’s our next goal-getting users to start using the chain and creating new features that bring tangible benefits so that they can see why they’d choose tokenization over the traditional route.

If people are able to collateralize tokenized securities, it can bring a host of new options and financial products to the world, and that’s really exciting. On Ethereum we see a lot of smart contract lending protocols like Compound and Aave where users can borrow or lend Bitcoin, Ether, and stablecoins. I foresee a future where users can collateralize securities in order to borrow money. We see reports of ultra-high-net-worth individuals not paying tax because they don’t receive income. Instead, they own securities which they put up for collateral in order to borrow money. If the average user could borrow by collateralizing their assets on the blockchain and avoiding a taxable event, it would start to level the playing field. A major benefit of blockchain technology is that it opens up possibilities to the middle and lower classes that aren’t available to them in traditional finance.

Why do you think regulators might eventually require securities to be tokenized?

‍Chris: The beauty of blockchain is that it is a transparent ledger that shows a perfect record of ownership at all times. You can look at any specific time for any asset and see which addresses own how much of something. Ultimately, this creates a perfect shareholder list that can make dividend payments and corporate governance much easier. There have been instances where companies have problems executing dividend payments because they can’t keep track of who owns what and more shares are sold than the company thinks to exist, ultimately resulting in shareholder and company loss and causing significant legal challenges. With blockchain, though, a company can say “anyone who owns this share, at this time on this day, will receive a dividend” and execute it programmatically, resulting in easier and quicker execution.

Blockchains can also be used to facilitate the tracking of funds and the movement of shares, which should be appealing to regulators. Given a regulator’s ability to see the movement of shares, it can also significantly help them perform their job. If they’re trying to look into insider trading or fraudulent activity, seeing share activity on the blockchain might bring to light potential issues they couldn’t see as easily with more traditional processes, while providing them with real-time data into traditionally opaque, private markets.

Chris: I’m just so thankful for everyone over the past four years who has been with us to help build this project out, including the wider Polymesh/Polymath community who believe in our project and support what we’re trying to accomplish. Polymesh was a novel idea when we began, but we’re now at the point where there’s a layer-1 securities-focused blockchain that institutions can begin using. While the job is certainly not done, we’re now one step closer to realizing the dream that securities will end up being tokenized. I’m really thankful for everyone who has worked with us on the blockchain at various points in time, and everyone else who shares the vision that a tokenized world offers more benefits and equality.

To find out more about Chris or the other contributors in the Polymesh Association, visit polymesh.network/team.