← Back to blog posts
The blockchain
October 19, 2021
Link copied to clipboard

Polymesh Node Operators: what they do and who they are

Explore the node operators on Polymesh and discover what sets them apart from other entities. Then meet a few of the licensed financial entities working to bring security to Polymesh. 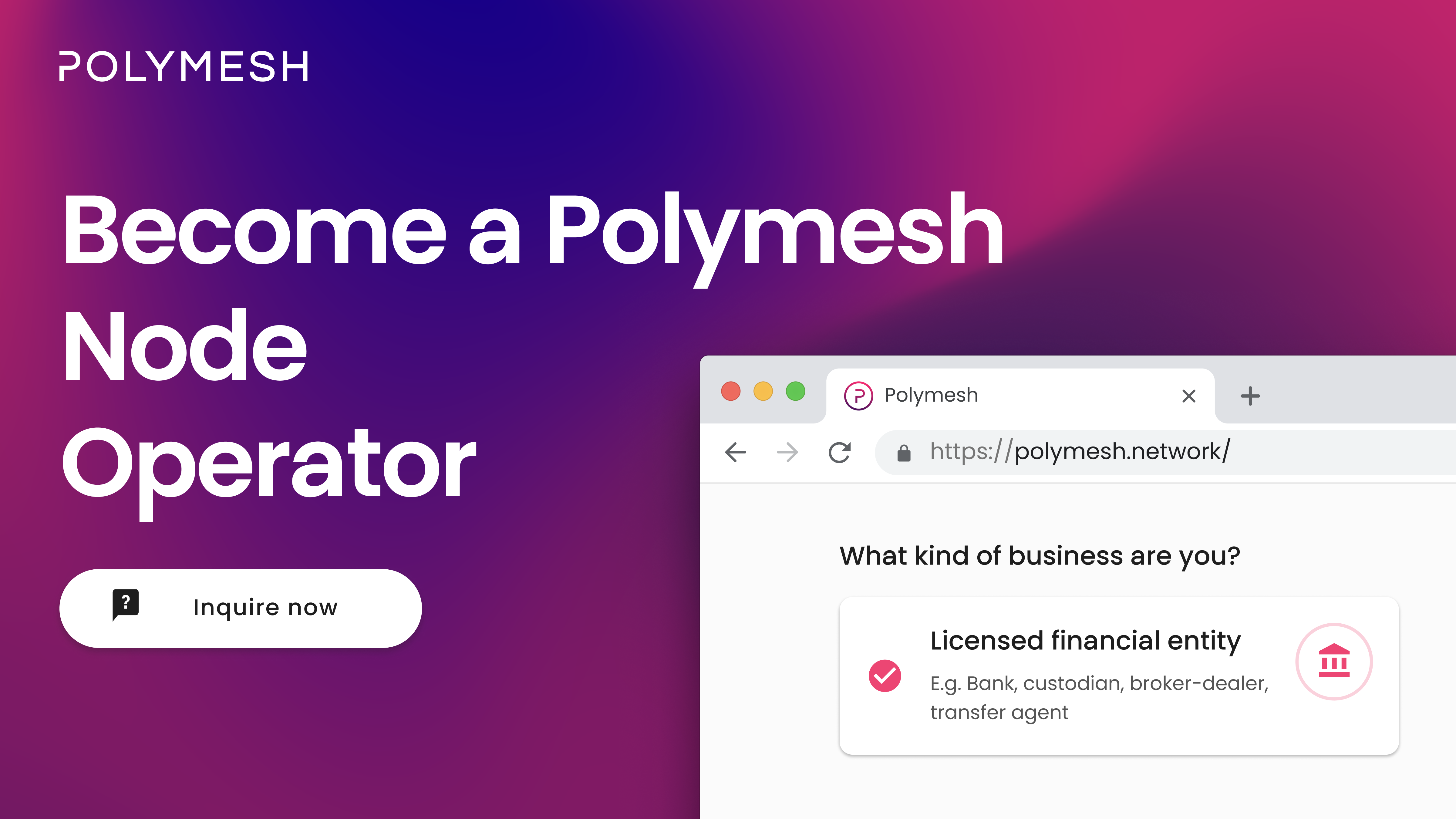 If you've explored our website, you've probably come across the term 'operator'. But who are the Polymesh node operators, and what exactly do they do?

It essentially concerns one thing: nodes.

On a blockchain, data is stored on a node, which functions as a server and contains a copy of the blockchain and its transaction history. Node operators (or validators as they may be called on other proof-of-stake chains) essentially run the chain's software by validating new blocks written to the chain and broadcasting them to the network.

Let's now explore node operators on Polymesh and what sets them apart from other entities.

The Importance of Node Operators on Polymesh

Architecturally, Polymesh is a public, permissioned blockchain, meaning anyone can run a regular node, as well as check the upholding of network rules and the public state secured by the blockchain. However, not everyone can run nodes that author new blocks or vote on block finality. These functions are reserved exclusively for the operators.

Permissioned node operators are one of the aspects that makes Polymesh unique. Most blockchains allow pseudonymous entities to write new blocks and validate transactions, but a blockchain built for compliance and security needs to ensure only trusted, known entities can author blocks. On Polymesh, node operators must be permissioned entities and regulated financial institutions in their respective jurisdictions. This helps to keep Polymesh secure and operational at all times.

Entoro is a global investment bank and advisory which aims to optimize the traditional banking process with the efficiency of modern technology. Based in Houston, Texas, Entoro was formed in 2016 with the aim of leveraging technology to increase efficiency in product offerings and operations.

We asked Entoro’s Managing Partner James Row why Entoro will be running a node on Polymesh.

“Polymesh is unique as a blockchain optimized for regulated markets and assets, and its technology and infrastructure have immense potential to improve the efficiency of traditional investment banking processes”, James answered.

“Because Polymesh is built specifically for regulated assets, it provides confidence that the technology can keep pace with market requirements”, Nyala’s CEO Johannes Schmitt said when asked why Nyala was interested in becoming one of Polymesh’s earliest node operators.

‍Oasis is the first US-regulated trading system (ATS) authorized to allow users to trade digital securities for digital cash (i.e. stable coins or central bank digital currencies) in addition to fiat. The company’s mission is to bridge the world of traditional finance and decentralized finance and lead in digital securities innovation by leveraging blockchain and smart contract technology to expedite the transfer and settlement of assets.

When asked why Oasis was joining the growing network of node operators on Polymesh, Oasis’ CEO and Co-Chairman Pat LaVecchia said, “Polymesh is an attractive alternative that brings the benefits of blockchain–transparency and efficiency–while overcoming problems of compliance and confidentiality seen on public chains.”

‍Founded in 2018 by a young team with experience in digital assets and blockchain, Scrypt was one of the first regulated Swiss companies to provide institutional investment solutions for digital assets. Scrypt aims to promote the growing decentralization of finance so investors can access and create value in a transparent, trustless, and immutable ecosystem.

We asked Scrypt’s Chief Operating Officer Sylvan Martin what compelled Scrypt to get involved in running a node on Polymesh.

His answer? “Polymesh provides strong foundations that will play a critical role in helping blockchain companies meet the needs of capital markets and their participants.”

“We expect Polymesh to become ubiquitous in the security token space, so getting involved by running a node is a no-brainer for us,” said Mike Kessler, CEO and Founder of Tokenise when asked what drew Tokenise to running a node on Polymesh.

‍Saxon Advisors is a London-based digital asset corporate finance advisory firm founded in 2018 in order to institutionalise the capital raising process for digital asset companies. Since then, it has acted as the lead advisor on more than $100m worth of transactions, for projects that range from Layer 1 blockchains and dapps to cryptocurrency wallets and custody providers.

Here’s what Saxon’s Managing Partner Ultan Miller had to say about why Saxon chose to get involved: “As strong advocates of Polymesh and the way it’s designed to bring institutions on board with security tokens, we’re committed to connecting more financial services companies to the chain and helping to realize the network’s full potential.”

Interested in the benefits of running a node? Become a node operator on Polymesh.