Introducing the Polymesh Roadmap for 2022

Now that Polymesh is live, operational, and stable, we’re looking forward to bringing new features in 2022 through a series of chain upgrades including smart contracts, NFTs, MERCAT, and more. 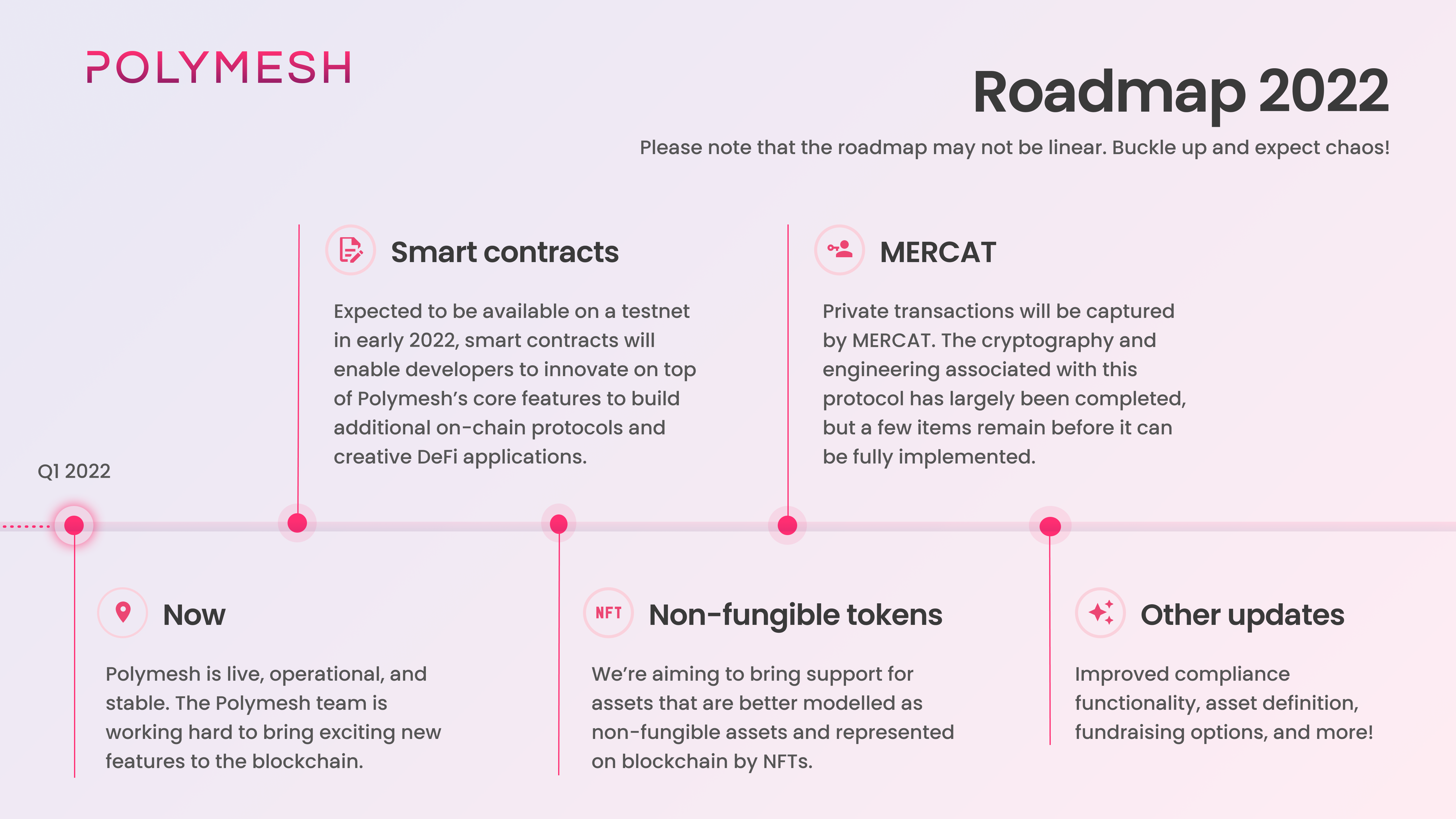 In October 2021 we launched the Polymesh Mainnet, the culmination of two years of combined engineering, operational, business development and marketing efforts.

Since its public release, thousands of users have onboarded to Polymesh and are helping secure the chain through staking POLYX and participating in on-chain governance. There’s also been a strong start in onboarding and integrating ecosystem organizations (e.g. KYC firms, asset issuers, custodians, operators, governance participants).

Now that Polymesh is live, operational, and stable, we’re looking forward to bringing new features in 2022 through a series of chain upgrades.

One of Polymesh’s unique attributes is that it incorporates sophisticated logic for the issuance, compliance, settlement, and lifecycle management of tokenized securities directly in the base layer of the chain. These features sit alongside base layer modules that help organizations and users manage on-chain identities, permissioned access, external agents, and more, all without the use of smart contracts.

While these core features provide sufficient functionality for many use-cases, this functionality can’t be easily leveraged by developers looking to innovate with the blockchain. That’s why one of the first features we’re introducing is smart contracts.

Delivering smart contracts on Polymesh will enable developers to innovate on top of its core features to build additional on-chain protocols and applications that rely on base layer functionality and guarantees, whilst unlocking the creative potential of DeFi offered by blockchains supporting smart contracts.

Work on this functionality has already begun, and is expected to be available on a public testnet in the first half of 2022.

Polymesh currently supports tokenization of assets, which meets requirements for many types of financial products (e.g. structured products, private equity, REITs, bonds). However, not all financial products make sense to model as tokenized assets; certain types are better modelled as non-fungible assets and represented on the blockchain by non-fungible tokens (NFTs).

There are common types of financial products that can’t be naturally tokenized and are instead naturally modelled as NFTs. Examples would be derivatives or swaps, which typically represent a bilateral agreement between two or more parties to exchange cash-flows on a scheduled basis.

Other examples we’ve discussed with various companies include crop receipts and invoices, where each asset has unique data (such as the farm or counterparty).

We’re aiming to bring support for these types of financial products to Polymesh in a way that fits with our current core base-layer functionality and can be used alongside or in combination with tokenized assets. This unlocks many new exciting use-cases for Polymesh, including the ability for a tokenized asset to represent a basket of NFTs, or for one NFT to include rights and obligations linked to one or more other NFTs.

One feature which is important to multiple use-cases on Polymesh is the ability to keep settlement instructions and asset holdings private to a defined set of users on-chain.

At the moment, any public observer can see all of the transactions related to a particular asset on Polymesh and all of the DIDs that hold that asset on-chain. While DIDs are pseudo-anonymous and using multiple identities can somewhat obfuscate asset holdings, with sufficient statistical analysis an observer could likely derive a detailed picture of the transactions related to an asset.

Private transactions use zero-knowledge proofs and homomorphic encryption to allow asset transactions to be recorded on the public blockchain without details such as amounts and asset types being public. On Polymesh, this is captured by a protocol called Mediated, Encrypted, Reversible, Secure Asset Transfers (MERCAT).

The MERCAT whitepaper describes a protocol which we feel helps to meet requirements for private transactions while allowing asset issuers to audit their assets and track their cap tables. The cryptography and engineering associated with this protocol has largely been completed, but there are still a few items to figure out before it can be fully implemented.

Specifically, there remains significant work to provide the necessary off-chain tooling to allow asset issuers and their agents practical access to these features. Such private transactions (which involve the generation and verification of zero-knowledge proofs) are significantly more computationally expensive than a normal transaction, and require much more orchestration between different parties (e.g. asset issuers, mediators, and auditors).

We’re working on identifying some key initial use-cases that we can use to fully flesh-out the requirements for delivering these features and their return on investment, as well as how best to incrementally roll them out.

Smart contracts, NFTs, and privacy via MERCAT will be the headline features we’re looking to incorporate on Polymesh this year. However, there’ll be continual incremental improvements across lots of different areas as well.

Alongside the core chain updates and features above, we’re continuing to improve the SDK and some associated tools that allow third parties to easily integrate with the blockchain.

Another important focal area is allowing more flexible approaches to key management. Polymesh directly supports both ed25519 and sr25519 based keys and has a hardware wallet-based app (Ledger Nano), but many companies have more complex requirements to use either HSMs or MPCs to further improve key management and security. Supporting these use-cases requires partnerships with custodians and key management solutions, as well as opening up the SDK to allow a more generic interface for signing transactions.

2021 was a hugely exciting year for Polymesh that put the blockchain on a secure regulatory and structural footing, culminating in the release of the Mainnet.

In 2022 we’ll continue to build new exciting features, incrementally improve existing features, and focus on adoption through improving the tools that allow easy integration with the chain.

Alongside engineering efforts, we’ll continue in critical business development efforts to bring stable coin providers, custodians, transfer agents, broker-dealers, security token exchanges, KYC and CDD providers, and many other key ecosystem participants to the chain. These efforts will drive new engineering requirements, and the Polymesh Association will remain flexible and agile to meet these demands alongside the headline features discussed above.