← Back to blog posts
The blockchain
May 11, 2022
Link copied to clipboard

Public permissioned: bridging the best of both worlds 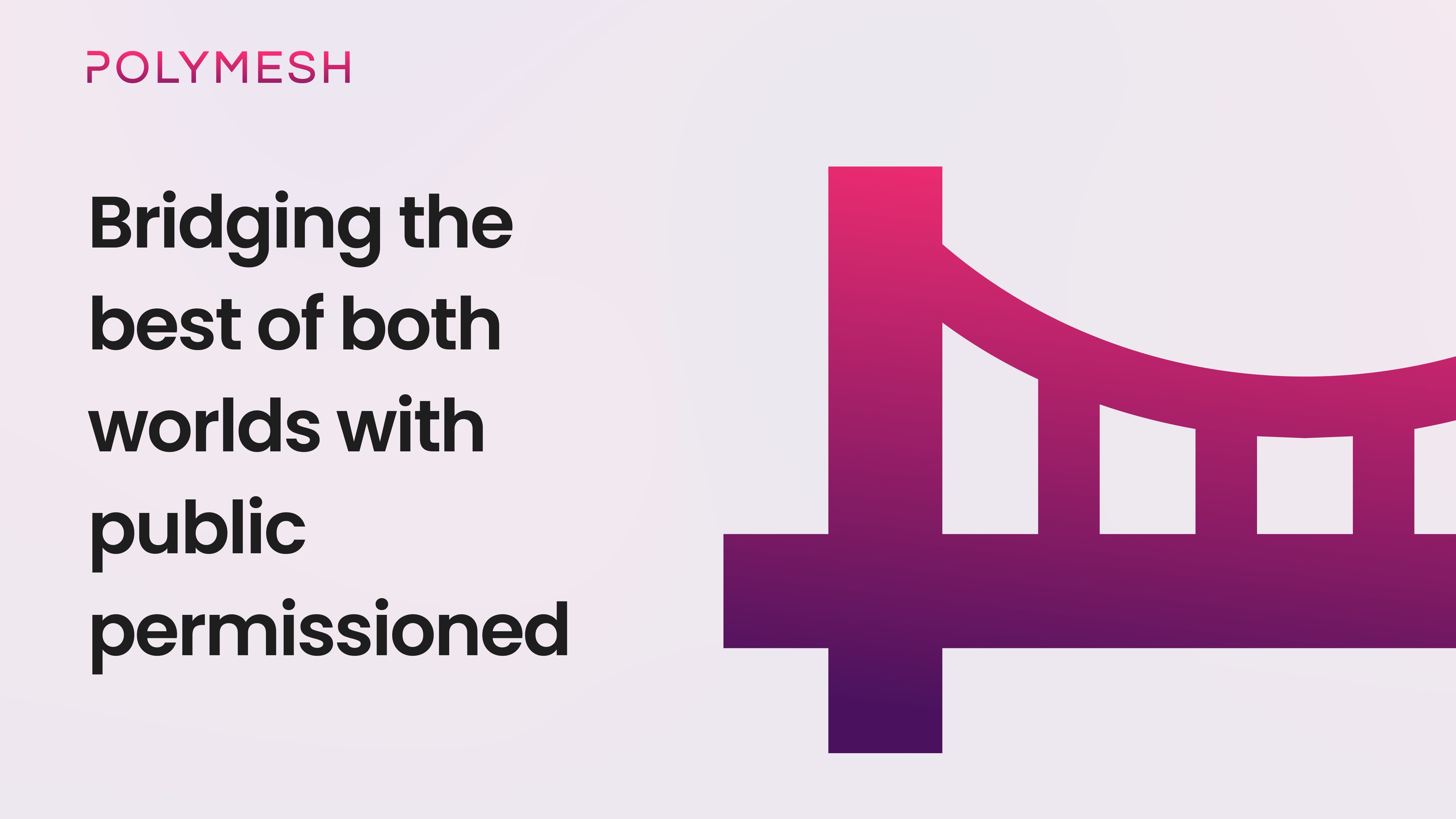 That’s because of a new kind of blockchain infrastructure that exists and which Polymesh belongs to: the public permissioned blockchain.

The key to meeting identity requirements

Permissioning is useful because there are many cases where a fully decentralized blockchain is problematic.

Privately held companies or regulated financial entities, for example, often need to ensure they’re only participating in transactions with individuals with known or approved identities. Moreover, it’s important that the chain can only be maintained by entities who can be trusted not to initiate a consensus-based attack or re-write transactions or rules for their own benefit.

On permissionless networks, this can’t be guaranteed, leaving the gate open to a whole range of problems for security and compliance. Possibly an extreme example, but the chance that you might be participating with a terrorist organization or any other entity on an OFAC blacklist is not worth the risk. Hence the hesitancy of the financial industry to migrate to blockchain technology even though it could benefit immensely.

A permissioned blockchain provides a way to overcome this by enforcing entry requirements for participants on the blockchain. Participants must provide their identity, even if the exact identity criteria varies by blockchain. This is the basis for membership control; it’s just not possible if the network can’t tie identities to its users.

The participants’ identity data is authenticated and bound to their digital identity, which is then authorized to perform specific actions on the chain. Again, what users are permissioned to do versus not do and the visibility of this information will be different based on the blockchain and its primary use case or ethos.

Polymesh is a blockchain for regulated securities, so it’s important for each of its users to have a verified identity, whether issuers, investors, node operators or stakers. This helps Polymesh users to comply with regulatory requirements and facilitates compliance.

Hold up! All this talk about permissioning might make you wonder whether it makes a blockchain centralized (and therefore precludes many of its benefits–we’ll touch on these below).

It’s true that permissioning involves an element of centralization. However, it’s important to note that decentralization is a spectrum and can occur on a variety of levels: political, architectural, or even logical (although as a central database, blockchain can’t be logically centralized)– see Vitalik Buterin on the meaning of decentralization.

A permissioned blockchain is centralized with respect to the element of network entry, however it’s not necessarily centralized when it comes to everything else. Even within permissioning systems there are various levels of centralization. On Polymesh, users become permissioned with a third party customer due diligence provider, and this third party is the only entity holding the sensitive, personal data.

The benefits of decentralized governance

For many, the concept of a centralized blockchain misses the mark. Let’s look for a moment at the benefits that decentralization brings:

Needless to say, decentralized blockchains bring numerous benefits in terms of transparency and security. For the securities market, in which trillions of dollars circulate everyday, these benefits simply can’t be overlooked.

It’s not just about using technology which is more efficient and cost-effective (although these are great benefits); the true value of blockchain is in its ability to be maintained without relying on a central authority. Only then can participants place full trust in the network’s data– because they don’t need to rely on trust at all, since the information is there for them to verify themselves.

Of course, a fully decentralized blockchain isn’t necessarily the most trustworthy. One might be even less trustworthy than a private blockchain, if the nodes can’t be guaranteed to act reliably or not manipulate consensus for their own benefit.

This risk explains the hesitancy of regulated financial institutions to turn to decentralized blockchains, despite the clear benefits they bring. They just haven’t been able to compete with private blockchains when it comes to guaranteeing the identity of their participants, from the individuals taking part in transactions to the entities who write them to chain.

But public permissioned blockchains like Polymesh challenge this by providing a way to bridge the two and offer the ‘best of both worlds’.

Public permissioned networks offer a unique kind of infrastructure which enables participants to benefit from the permissioning inherent in private blockchains without providing a fully closed or centralized network.

Whereas a private blockchain is closed to the public, a public permissioned blockchain isn’t; it simply has entry prerequisites that involve users identifying themselves first. Look beyond this, though, and you’ll find its decentralized governance model makes it run more like a public permissionless network than your typical private consortium.

Ultimately, public permissioned blockchains demonstrate how it’s possible to deploy blockchain in a public network while still enforcing a known identity for each of its participants. This makes them incredibly well-suited to the financial industry, and particularly securities.

Because of the complex regulatory requirements that securities are subject to, it just wouldn’t do to put them on a network that’s fully decentralized both architecturally and politically. A level of central control is necessary to ensure that permissioning is correctly in place and that certain rules in the blockchain’s protocol can’t be re-written to compromise its purpose.

Luckily, Polymesh offers exactly that! Being purpose-built for regulated securities, Polymesh combines a strong on-chain governance model with identity, compliance, and confidentiality built into the chain’s core. The result? Polymesh overcomes the challenges of regulated assets on blockchain and even makes instant settlement possible.