← Back to blog posts
The blockchain
May 27, 2022
Link copied to clipboard

Polymesh offers POLYX token holders a unique opportunity to participate in staking and earn staking rewards. Here's everything you need to know to get started staking POLYX on the blockchain. 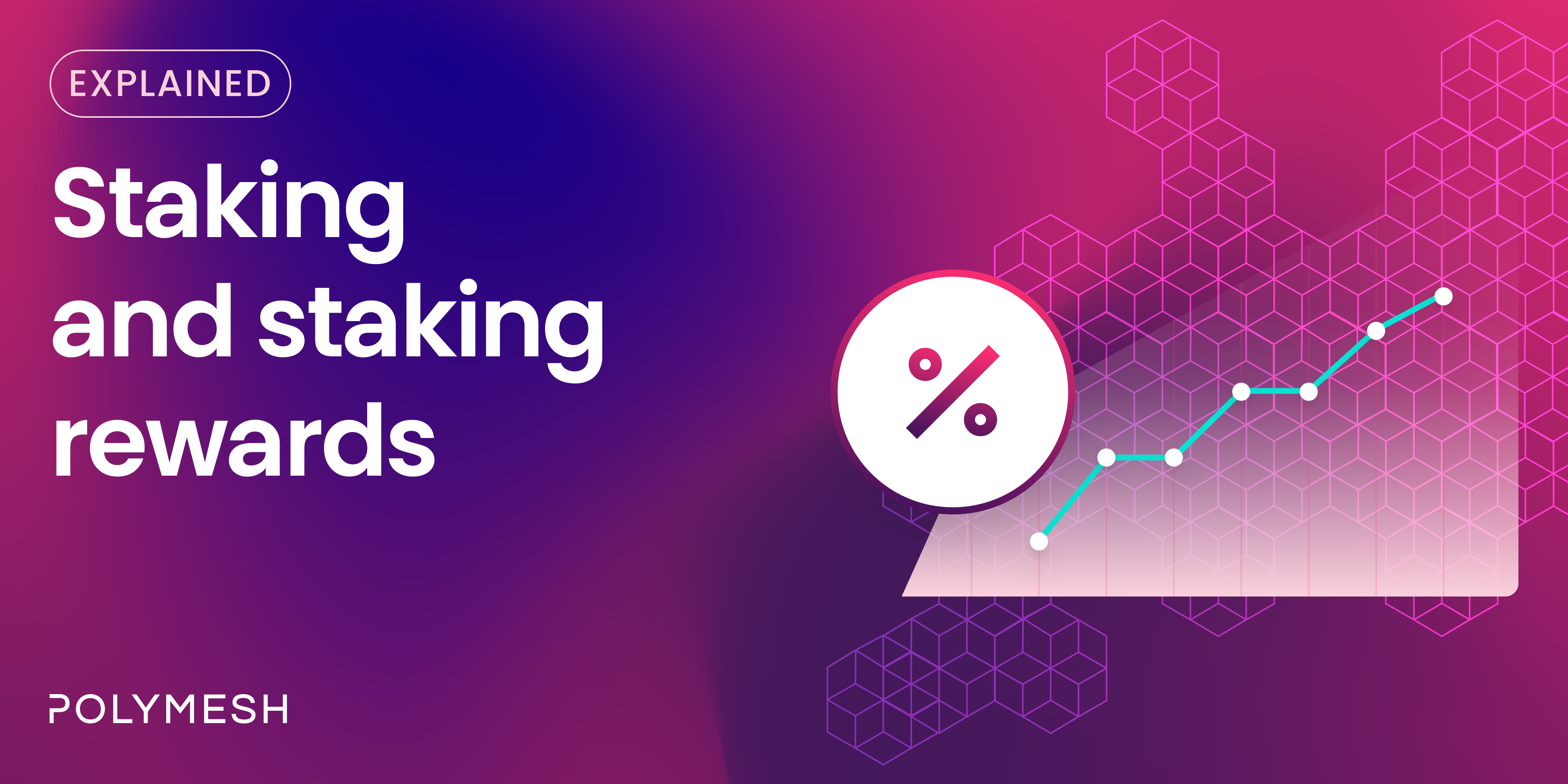 As a proof-of-stake blockchain, Polymesh offers POLYX token holders a unique opportunity to participate in staking and earn staking rewards.

Broadly speaking, staking in crypto is a way to secure the blockchain while benefiting from your tokens. It’s an integral component of proof-of-stake (PoS) consensus mechanisms, but in recent years crypto staking misconceptions have warped the idea of staking into any mechanism that locks your tokens in exchange for staking rewards.

In this explainer, we’ll teach you why staking is important and how it benefits both stakers, node operators, and the blockchain ecosystem itself. We’ll also answer some common staking questions such as:

Crypto staking is a way to earn rewards while supporting the security and operation of the network by locking your crypto investments.

How does staking work?

Blockchains require a mechanism to achieve consensus to verify transactions and the state of the ledger. One mechanism for arriving at consensus is Proof-of-Stake (PoS).

Validating nodes (called operator nodes on Polymesh) lock up their coins to randomly be selected by the protocol to create a block and receive a reward. Usually, node operators with larger amounts of stake have a higher chance of being chosen as the next block validator.

There are many different types of staking protocols. Polymesh uses Nominated Proof-of-Stake (NPoS), with stakers nominating node operators by bonding their POLYX tokens to them to increase the node operator’s chance of being selected into the block validator pool. If successful, both the staker and node operator will receive staking rewards. Staking rewards are distributed to validators in the pool each era.

NPoS is an improved version of Delegated Proof-of-Stake (DPoS), where coins can be committed as votes towards which validators get to become delegates and create the next block. Usually, voting power is proportional to the amount staked. While designed to be more democratic, in practice DPoS systems often tend towards higher centralization as it’s more optimal for stakers to delegate one validator and easier for users to concentrate power, form cartels, and bribe voters.

Why do you earn with staking?

It’s easy to see why staking in crypto is attractive for token holders (staking rewards!). But why do you earn rewards in the first place?

Common crypto staking misconceptions would have you believe that staking is just about locking up your assets so the price of a token goes up (with staking rewards as compensation for not selling your tokens). See a thought-provoking piece on staking here.

Sure, there are many modern staking protocols which support this idea and don’t do much beyond spit out new tokens. But there are also many cases where staking isn’t a shell game and in fact a crucial component of an ecosystem.

Polymesh is one example.

For Polymesh, staking has a practical and technical purpose as a way to reward users risking their POLYX as collateral to help node operators validate blocks.

It’s simple: stakers provide security to the network by putting their POLYX tokens at risk when nominating them to node operators, and are rewarded for doing so with staking rewards proportional to the value they provide.

You can think of staking rewards as the network’s way to buy chain security and develop a more sustainable, larger, and robust ecosystem.

What can you earn by staking?

You can stake your tokens to earn staking rewards in the form of tokens. It might be the same crypto token used in stake, or it could be a second token.

Because it may involve minimum lock-up periods or unbonding periods, staking may not be ideal for crypto investors looking for a quick flip or bothered about short-term price fluctuations. But it can be highly profitable for token holders interested in yields on their long-term investments.

The primary factors affecting your crypto staking return on investment (ROI) will be the blockchain’s parameters for new supply and slashing, along with your node operator’s performance.

Every blockchain’s protocol is unique and outlines different parameters affecting staking rewards. These include the minimum amount of stake required (if any), bonding and lock-up periods, the time and frequency of reward payments, maximum commission fee rates for validators, and the penalties for slashing.

One major blockchain-variable factor affecting your crypto staking ROI is the staking rewards rate, which is calculated in a variety of ways depending on the staking protocol used (and can vary itself over time).

Finally, staking rewards will also be affected by market dynamics such as the number of stakers, the total supply of coins staked, and expected value from alternate uses of the coin.

How are staking rewards calculated on Polymesh?

On Polymesh, the token used in staking and staking rewards is the same (POLYX).

For each block created on Polymesh, the authoring node operator and its stakers are rewarded in POLYX. Staking rewards and fines are calculated and enacted per era (every 24 hours).

Here are some rewards that stakers on Polymesh are earning today (27/05/2022) for assisting node operators in providing security to the network:

At the time of posting, stakers on Polymesh are earning staking rewards of 24.8%. For the most up to date information, head to https://mainnet-app.polymesh.network/#/staking/targets.

What are the risks of staking crypto?

Of course, staking in crypto comes with risks. Here are a few of the main risks of staking crypto:

Many of these risks echo the risks in traditional finance and might be intuitive for token holders wanting to become stakers. But there are other risks of staking crypto that are less economic. .

How do you get started staking?

To get started staking, you’ll need to own crypto that can be staked. On Polymesh, stakers stake POLYX, which you can obtain through the POLY:POLYX Bridge or by direct purchase from an exchange. See where to get POLYX here.

Once you’ve onboarded to Polymesh, acquired POLYX, and installed the Polymesh Wallet, you’ll be ready to:

You can set the amount of POLYX you wish to stake and select the node operators you wish to stake it on. Note that it may take up to 1 day to update your stake, and any amount unstaked will be locked for 28 days.

Stake POLYX on node operators to increase your chance of receiving rewards. Note that only the top 2,048 stakers per operator will receive rewards.

When one or more node operators you have staked on are part of the block-writing operating pool, you’ll earn staking rewards.

Watch our staking demo for an overview of the process:

For more about staking on Polymesh, head to polymesh.network/staking.