← Back to blog posts
Learning
November 16, 2022
Link copied to clipboard 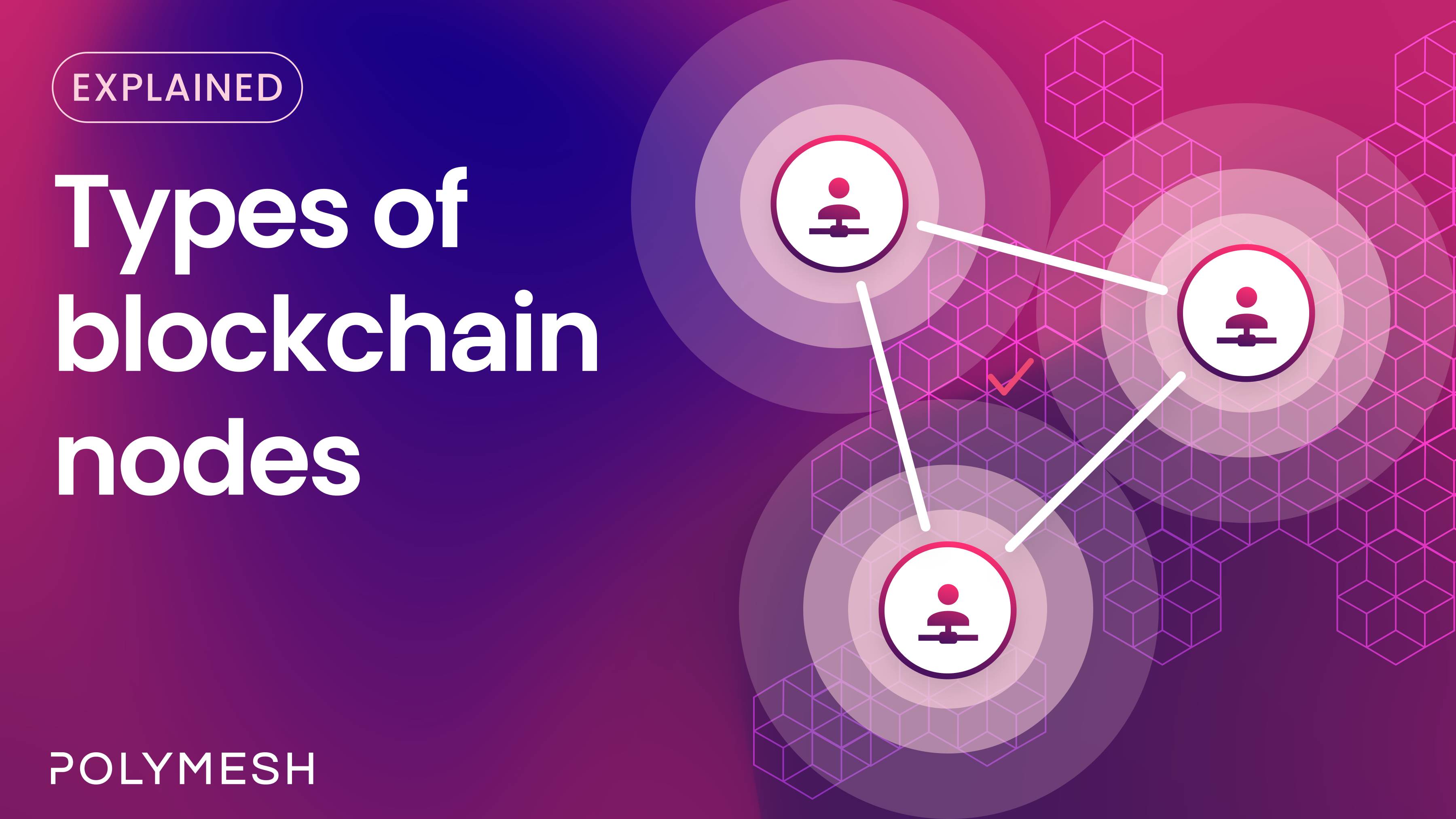 Anyone versed in blockchain news knows that blockchain nodes are not without a little notoriety– whether it’s Bitcoin mining nodes coming under fire for their immense environmental impact, or Ethereum and Solana nodes allegedly violating cloud provider terms of service, nodes have carried a bit of a contentious air recently.

How these issues play out will be incredibly important, not just for Bitcoin, Ethereum, and Solana but for all blockchains. After all, it’s nodes that keep the blockchain up and running, regardless of the consensus algorithm it employs.

In this explainer, we’ll cover what blockchain nodes are and how they work, focusing on a few common types of nodes.‍

What are blockchain nodes?

A blockchain is a distributed ledger composed of a network of multiple nodes.

Blockchain nodes communicate with each other to broadcast the network and find consensus necessary to chart and validate new blocks according to the network’s consensus algorithm.

On Polymesh, anyone can set up a node, but certain functions such as block validation are permissioned and reserved for entities that meet specific criteria.

How do blockchain nodes work?

Blockchain nodes work by permanently recording, storing, and encoding transaction data into blocks that are then chained together.

What are the types of blockchain nodes?

Common types of blockchain nodes you may have seen include masternodes, mining nodes, full nodes, and light nodes. But there are other node categories too–authority nodes, pruned full nodes, and archival full nodes are a few examples.

The consensus algorithm determines the nodes’ characteristics, such as their power and capabilities within the blockchain network.

Let’s look at a few common types of blockchain nodes.

Light nodes, as the name implies, store a lightweight version of the blockchain. Light nodes are similar to pruned full nodes in that they save up on storage space by only downloading select information, however light nodes are much more limited.

As found on Bitcoin, light nodes only contain block headers, which are codes in each block signifying the block is valid. This means light nodes can connect and transact on the Bitcoin network without storing its full history, but can’t independently verify the network rules and therefore must connect to full nodes to get the block data.

Full blockchain nodes are nodes which host and synchronize a copy of the blockchain, ensuring that all transactions and blocks follow protocol rules. While light nodes only download key data, full nodes contain complete data about each block. Hence full nodes are the ideal source for a complete record of transactions carried out by the network.

Full blockchain nodes can be classified further into pruned full nodes or archival full nodes depending on whether they store a copy of the entire blockchain from its genesis block, or only its more recent transactions.

On Polymesh, the choice to run a regular pruned full node or regular archival full node is up to the user and the investment they are willing to put in.

A pruned full node is a node which performs nearly all of the functions of a full node, except it prunes its local blockchain by deleting earlier blocks in order to save storage. This means the pruned full node doesn’t possess a complete copy of the blockchain; it only carries enough of the latest data to be a reliable registry as determined by the owner.

While less comprehensive than full nodes, pruned nodes are useful because they can be run on virtually any device and don’t require immense disk space. Thus the blockchain can benefit from having more full node participation (and capture more benefits from greater decentralization), especially from those who are lower-tech users.

Pruned nodes become more useful the longer a blockchain’s history becomes. From a security standpoint, they are just as secure as normal full nodes, and for the most part they are just as useful for transaction validation and verification.

The only limit for pruned nodes is in its ability to validate transactions at any point in time, since pruned full nodes do not possess the entire copy of the blockchain. As long as a blockchain has other full nodes to verify the information, though, this limitation isn’t a real danger.

Archival full nodes are full nodes that contain an entire history, back to the beginning of time.

Archival full nodes are the only valuable and reliable source for verifying transaction data from earlier in a blockchain’s history, as they aren’t burdened by the time or storage limit of pruned full nodes. Relatedly, archival full nodes are the only nodes that can connect newer nodes to the network from its genesis block, or restart the network from its point of origin in the event of catastrophe.

While pruned full nodes are a nice-to-have in the network as they contribute to better security and decentralization, archival full nodes are a need-to-have as they’re the only way the blockchain can retain its full availability.

The more decentralized full nodes a blockchain has, the more secure the network is, since it would require destroying all for nodes in order for the network to fully cease.

Some blockchains contain masternodes, differentiated from normal full nodes by their special privileges and responsibilities.

Typically, masternodes don’t add transactions to the chain for verification; they only verify those submitted by other nodes, as well as perform other managing, governing, and regulatory roles as defined by the protocol.

Polymesh doesn’t have masternodes per se, but it does have nodes who are permissioned to validate transactions, called operator nodes.

Since Polymesh is a blockchain designed for regulated assets, it’s important that block validators be determined by more than just economic stake. Regulated institutions need the confidence that the entities with the power to validate– or potentially reverse– their transactions can be trusted to act in fair accordance with the network protocol rules.

On Polymesh, node operators must be known licensed financial entities who are permissioned by Polymesh Governance. As explained below, this extra requirement helps provide Polymesh with the benefits of leveraging reputation as seen in systems with authority nodes.

Authority nodes are full nodes found in blockchain networks using proof-of-authority (PoA), a modified version of proof-of-stake (PoS) where the validator node’s identity proves their authority to generate new blocks. Instead of tokens, the PoA consensus algorithm leverages identity as a stake and uses a validator node’s reputation as the primary incentive for following the protocol.

Typically, the identity of authority nodes must be verified to maintain the integrity of the blockchain. This necessity of some kind of permissioning mechanism to pre-select nodes means PoA is not entirely decentralized.

In an ordinary PoS system, it’s possible for discrepancy to exist between the size of one’s stake and one’s incentive to act in the network’s interest. Instead, investment in the network might be more accurately measured by the percentage of one’s holdings staked than the actual stake size itself. For example, a validator with 10% of total tokens staked is likely less invested in the network’s success than a valdiator with 60% staked, even if the first validator’s stake outnumbers the second.

PoA aims to improve upon PoS by equalizing validators’ motivations to work towards the network’s success, with known identity and reputation instead of economic value as what’s on the line for not following the protocol.

While Polymesh uses nominated proof-of-stake, the blockchain benefits from the way PoA leverages identity by also requiring node operators to be known, reputable entities. Polymesh operator nodes can therefore be considered authority nodes, as their identity is what grants them the right to author blocks before any tokens actually staked on them.

Interested in running a node on Polymesh? Check out our blog post on the benefits of participating in blockchain nodes, or find out more about how to become a Polymesh node operator by visiting https://polymesh.network/node-operators.