← Back to blog posts
The blockchain
November 23, 2022
Link copied to clipboard

Understanding POLYX tokenomics is important for any POLYX holder. Learn how POLYX sustains and interacts with the Polymesh ecosystem through transaction fees, staking, and the Network Treasury. 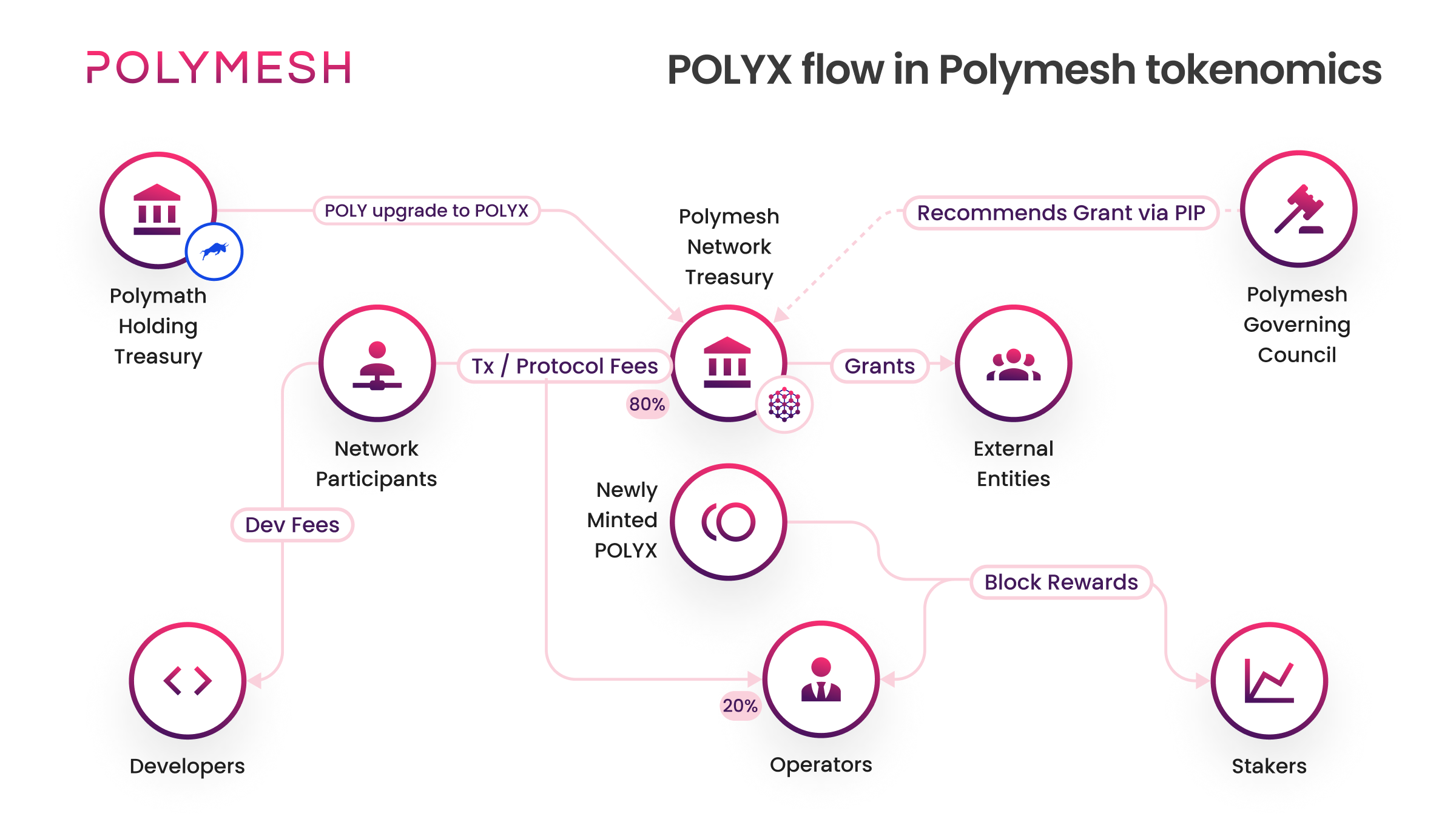 Before participating on the Polymesh blockchain, it’s fundamental for POLYX tokenholders – whether issuers, investors, developers or stakers – to understand POLYX tokenomics.

An amalgamation of “token” and “economics”, the word “tokenomics” captures the  science of a token economy. Tokenomics covers the elements that describe how the token works within the broader blockchain ecosystem.

More specifically, tokenomics describes how a token’s use is impacted by various factors such as the token’s creation, management, distribution, or even removal from a network. Some factors, such as supply and demand, are taken from traditional economics. Others are unique to crypto, such as the incentives inherent in proof-of-stake.

This brief explainer on Polymesh tokenomics outlines a few key factors governing the  use of Polymesh’s network protocol token, POLYX.

The POLYX supply approaches an asymptotic limit, with new tokens created based on an algorithmic supply schedule to help prevent continuous acceleration of supply growth.

The main mechanism to build the supply of POLYX is by upgrading existing POLY tokens on the Ethereum mainnet to POLYX on Polymesh via the one-way POLY:POLYX Upgrade Bridge. This uses a standard lock and mint process, locking the Ethereum tokens permanently by an Ethereum smart contract while minting new POLYX on Polymesh.

The only other way new POLYX tokens are created is when block rewards are minted to reward node operators and stakers.

To find the POLYX total supply, visit the Polymesh Block Explorer. For the most accurate reporting on POLYX supply, visit https://polymeshassociation.github.io/.

Block rewards and fines: the primary incentives for node operators and stakers

Block rewards and fines in POLYX are the incentivizing instruments behind Polymesh’s nominated proof-of-stake mechanism.

Under nominated proof-of-stake, node operators and stakers work together to power Polymesh’s enabling economy by staking within the network and acting according to its consensus rules.

Note that this doesn’t implicate node operators or stakers in ensuring the compliance of a transaction, only that the transaction was completed properly and adheres to the protocol rules.

Distributed in POLYX, block rewards are the primary incentive in place for node operators and stakers to act according to performance standards.

Staking on Polymesh works by having verified POLYX tokenholders bond their POLYX to node operators to increase their chance of being selected into the validation pool for the next era. When blocks are validated successfully, the block-producing node operator and its stakers both receive rewards.

In parallel, node operators can be penalized in the form of fines if they fail to meet performance standards of the chain.

Fines for node operators amount to their stake being slashed, resulting in the loss of POLYX. This disincentivizes node operators to behave harmfully or ineptly by providing a materially-impactful negative consequence for malicious, dormant, or incorrect activity.

At the moment, only node operators are subject to fines on Polymesh; stakers aren’t affected, and won’t lose their staked POLYX if it happens to be bonded to a malperforming node operator. This may change in the future.

POLYX and the enabling economy

One of the main ways POLYX supports and serves Polymesh is by fueling the enabling economy.

Similar to ETH on Ethereum, POLYX serves as gas on Polymesh and is used for paying various types of fees. All classes of fees on Polymesh are paid in POLYX by the originator of the transaction.

The POLYX fees at the core of Polymesh protect against denial-of-service (DoS) or spam attacks while promoting Polymesh development.

There are two types of fees on Polymesh:
‍

Fees are split at a 1:4 ratio between the block-producing node operator and the Network Treasury to fund system operational expenses.

Additionally, developer fees may be charged and set by developers of smart contracts; these fees would be paid according to what the developer chooses to implement and are not up to Polymesh.

The Network Treasury exists to build a sustainable and secure network, as well as grow the Polymesh ecosystem.

The Network Treasury is maintained and managed by on-chain governance with oversight from the Polymesh Governing Council. It has two primary objectives:
‍

How is the Network Treasury funded?

Polymesh’s Network Treasury is funded from transaction fees and protocol fees and distributed based on Polymesh Governance.

Requests to disburse POLYX funds from the Network Treasury are managed by the Polymesh Governing Council, and may eventually be governed by POLYX tokenholders depending on Governing Council decisions.

One of the ways the Network Treasury directly contributes to growing and maintaining the Polymesh ecosystem is by disbursing grants to bolster important developments.

With smart contracts on Polymesh, developers should feel well-equipped to tackle some desirable new features and integrations on Polymesh, such as wallet solutions or cross-chain settlement engines.

Developers who bring value to the Polymesh ecosystem won’t go unrewarded; with Polymesh’s Grants Program, developers who provide an answer and solution to a specific request for proposal (RFP) or even address unsolicited solutions may be provided a grant in the form of POLYX.

You can see the guidelines for grant applications and open RFPs on Polymesh’s Github.

For more information about POLYX and why it’s useful, visit polymesh.network/polyx.