← Back to blog posts
The blockchain
July 20, 2022
Link copied to clipboard

This blog post looks at the potential use-cases for Polymesh as a blockchain for tokenized securities and what’s considered a security token offering. 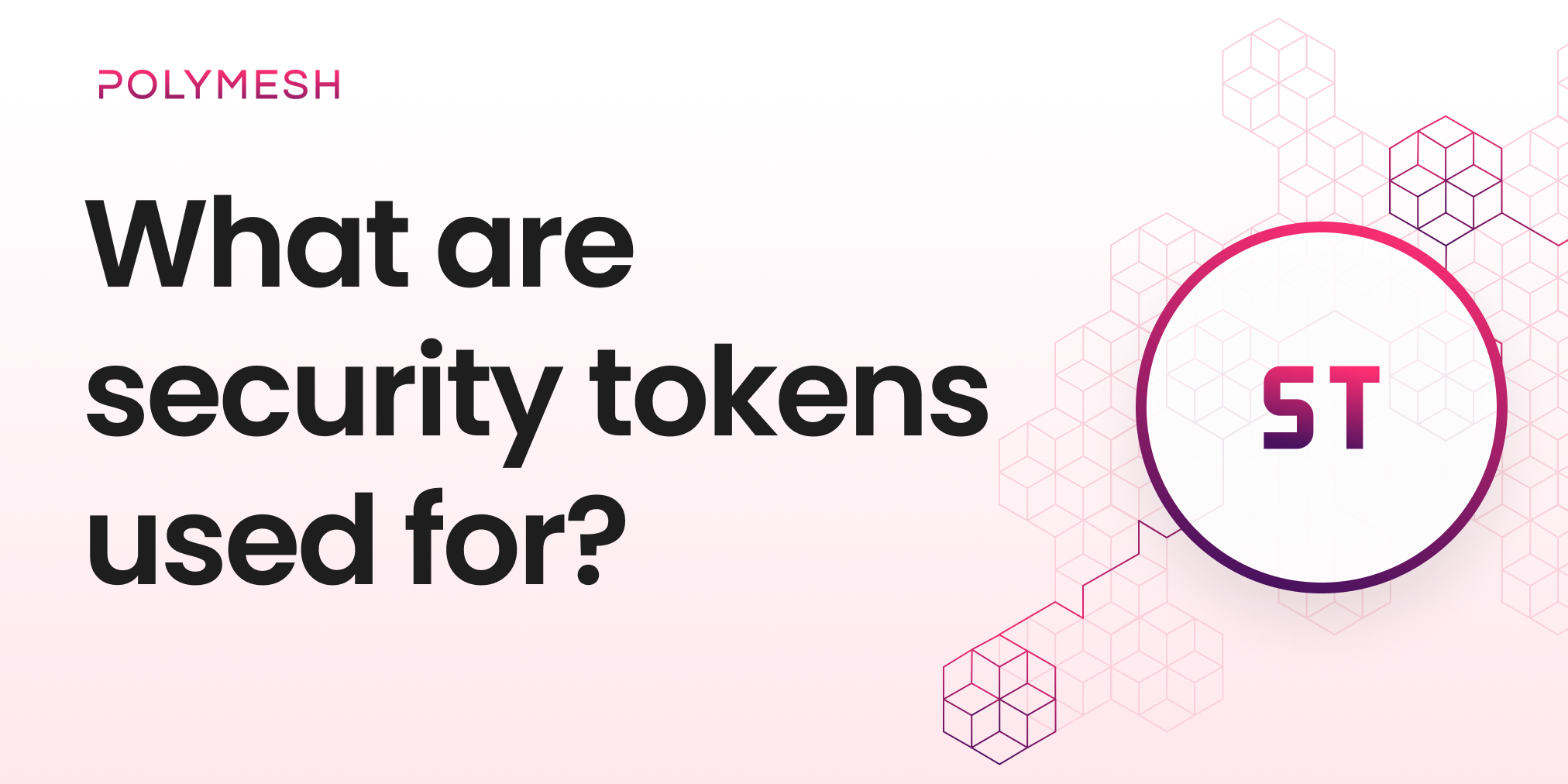 If you follow Polymesh on Twitter, you’ll know we call Polymesh “the blockchain for security tokens”. That’s because Polymesh was designed specifically for the tokenization of regulated assets.

This blog post looks at the potential use-cases for Polymesh as a blockchain for security tokens and takes a deeper look at what’s considered a security token offering.

In the context of blockchain, security tokens (also called tokenized securities) are blockchain tokens that represent securities. You can think of them as digital forms of securities that live on the blockchain.

In traditional finance, a security is typically defined as a negotiable financial instrument that represents some type of financial value; in other words, a financial asset that can be traded. Most securities are fungible, with holdings treated as identical and interchangeable with each other. However, some securities are non-fungible. Bonds, for example, might be issued by the same company but at different times and with different conditions attaching to them.

Common types of securities include:

Each of these make prime candidates to become tokenized securities, but security tokens can be used to represent other types of assets as well (e.g. real estate or fine-art). See a list of common tokenized securities at polymesh.network/security-tokens.

Why is Polymesh a blockchain for security tokens? Can I use it for other tokens?

Turning securities into tokenized securities brings a huge number of benefits to issuers and investors alike– transparency, efficiency, better compliance, and increased liquidity (to name a few). In order to capture these benefits, however, it’s important to use a blockchain like Polymesh that’s fit-for-purpose. That’s because security tokens (as securities) are subject to complex regulatory requirements, and the only way to enforce compliance and meet other industry and institutional needs is with infrastructure that takes these needs into account.

As a blockchain for security tokens, Polymesh was built with these needs incorporated into the base layer of the blockchain. Governance, identity, compliance, confidentiality, and settlement form the 5 key pillars, and their inclusion in Polymesh’s purpose-built infrastructure align the blockchain with the requirements of regulated capital markets. To learn more about why Polymesh was built as a security token-specific blockchain, see the origin story.

While Polymesh opens up possibilities for secure and compliant security tokens, it can be used for any financial product that can be tokenized. Whether it’s’ crypto, security tokens, non-fungible tokens, or utility tokens… Polymesh makes a great home for any token or technology that belongs to or has to interact with regulated financial institutions.

Take non-fungible tokens (NFTs). As unique tokens which aren’t interchangeable, NFTs are useful to represent assets with unique data, from .JPEGs to land titles (unique because they’re tied to a different plot on Earth). While built for security tokens, Polymesh’s identity- and compliance-focused infrastructure is useful for any transaction of tokens where the individuals or entities involved matter. For example, maybe you’re involved in a property deal for a (virtual) plot of land and want to ensure the actors you’re interacting with aren’t malicious or that certain identity-level restrictions can be enforced.

Is a security token a cryptocurrency?

The answer is no; security tokens aren’t cryptocurrency. Both crypto and security tokens might be fungible or mutually interchangeable blockchain-based tokens, but there’s a major difference in their purpose, intended use, and actual use.

The easiest way to conceptualize this is with the real-world comparison between currency and securities.

As currency, cryptocurrency is designed to be a medium of exchange or a payment method. Think of it like digital money that lives on the blockchain.

Security tokens also live digitally on the blockchain, but like securities, they’re intended to be used as investment assets and not methods of payment. Think of them as digital versions of stocks, bonds, or shared certificates (although they have many other uses).

Clearly, crypto and security tokens have different intended uses. So, why is everybody getting them confused?

It has to do with value, and the fact that crypto and security token offerings can both be held and traded on a blockchain exchange. This leads cryptocurrency to be treated like an investment asset, with investors holding it for its increasing value and later trading it for a return (much like you would hold and trade a traditional investment asset).

In a technical and architectural sense, crypto and security tokens might be very similar, but there’s a fundamental difference in their legal status. As tokenized securities, security tokens fall under the purview of securities law and are subject to securities regulations, but the same can’t be said for crypto, which may not.

When is a token a security token?

In the United States, the Securities and Exchange Commission (SEC) uses the “Howey Test” to determine whether a transaction qualifies as an “investment contract” and therefore is a security. With the Howey Test, in order to qualify as a security token, a tokenized asset must meet the following criteria:

Currently, there’s regulatory uncertainty as to whether a cryptocurrency can be considered a security. In 2019, the SEC ruled in a letter that Bitcoin was not a security because it only clearly met criteria (1) an investment of money. It didn’t meet criteria (2) investment in a common enterprise because Bitcoin token holders weren’t pooling funds into a “common enterprise”, and it didn’t meet criteria (3) because the intent to invest is to store wealth versus turn a profit. It also failed to meet criteria (4) since its value doesn’t depend on a third party.

However, the SEC hasn’t treated all cryptocurrency the same. In 2020, the SEC sued Ripple over its XRP token, claiming that the token is an unregistered security. Ripple has since challenged the SEC arguing that it is not. The case is still ongoing, with some speculating that the SEC’s recent motion to seal evidence was to avoid setting any legal precedent through the lawsuit.

Setting yourself up for successful token issuance

When it comes to token types, the difference is more conceptual than technological. On Polymesh, for example, security tokens and other tokens can be created in the same way with the exact same technology. That said, figuring out whether a token is a tokenized security is especially important as it will have real legal and operational consequences.

Ultimately, whether a token is a security token is determined by how the intent behind the token and the economic realities of the (security) token offering line up with regulatory criteria.

Within this regulatory uncertainty, issuers can set themselves up for success by choosing a blockchain for security tokens such as Polymesh that makes it easier to meet regulatory requirements if they do apply. Get an overview of Polymesh in the Polymesh 101 guide and discover everything you need to know!