← Back to blog posts
Developers
March 9, 2022
Link copied to clipboard

What can you build with Polymesh?

As a layer-1 blockchain with financial primitives built-in, implementation on Polymesh is incredibly easy. Here are 3 exciting possibilities of what you could build for security tokens and beyond. 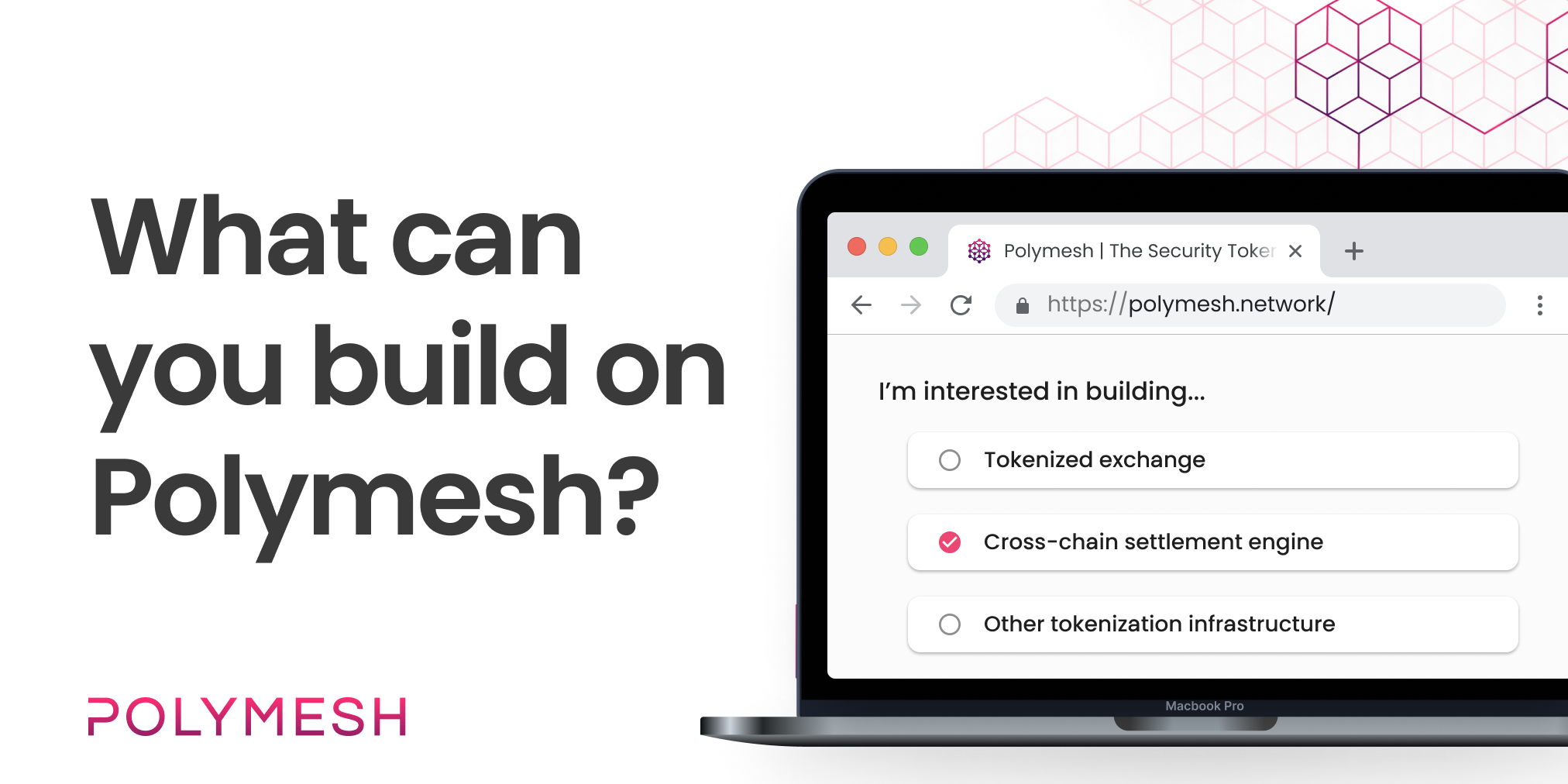 Did the Polymesh roadmap for 2022 leave you feeling inspired? Already dreaming up what could be possible on the chain?

When smart contracts are implemented, the world will be your oyster when it comes to building decentralized applications (dApps) on Polymesh. Until then, the options might be a bit more limited, but there are still many ways to build with the chain.

Developers could look to white labeling the token manager to design their own tokenization platform, or they could look to integrate existing systems with Polymesh to connect the Polymesh ecosystem with their own offerings.

Why choose Polymesh? As a layer-1 blockchain with financial primitives built into its core, Polymesh provides full functionality for identity and tokenization, with no further blockchain code required. As a result, implementation on Polymesh is incredibly easy.

What’s more, through our grants program developers can even receive funding to build features and functionality on top of Polymesh.

With that, let’s take a look at some exciting examples of what you could build! ‍

Being purpose-built for regulated assets, Polymesh is the perfect blockchain for any applications or infrastructure involving security tokens or which need to meet complicated financial regulations around identity and compliance.

One major use case for Polymesh – and something we’re seeing a heavy amount of interest in already – is as the underlying blockchain for a tokenized exchange or marketplace.

Polymesh provides a great foundational blockchain for these types of projects because it provides an SDK to easily integrate with existing exchange systems or marketplace in-house infrastructure.

Further, when it comes to asset transfer and settlement, Polymesh provides granular control and a high degree of flexibility with an overarching structure that provides assurances about transaction finality and regulatory compliance. ‍‍

What would a tokenized exchange or marketplace look like?

You could build a tokenized exchange or secondary marketplace on Polymesh for virtually any kind of physical or digital asset deemed a security. This could be everything from traditional stocks and bonds to race horses or artwork, but where we’re noticing a particularly strong interest for Polymesh at the moment is in commercial real estate. ‍

What would building a tokenized exchange or marketplace entail?

For a tokenized exchange or secondary marketplace, you’d essentially be building a platform that can list the assets currently available on Polymesh and would allow investors to either invest in them (primary distribution) or buy and sell the assets themselves (secondary marketplace).  This would require integrating Polymesh with an existing exchange or marketplace system; Polymesh only provides the underlying settlement, identity, compliance, and custody logic on its blockchain.

Luckily, the Polymesh SDK makes it exceptionally easy for developers to see the assets listed on Polymesh. You can integrate with the Polymesh SDK to easily list assets on Polymesh on your own platform and allow users to invest in or buy and sell them. Integration will also enable you to generate graphs, charts, and other data-reporting mechanisms related to the assets.

For a simplified example of what it would take to integrate Polymesh with an existing system, see our settlement example app on the developer portal, which walks you through how to integrate the chain with a stock exchange onto which brokers place orders for their customers.

If you need to add a service for know-your-client (KYC) or customer due diligence (CDD), we have a KYC example app for integrating with that too.

Ready to dive in? Check out the SDK as well as what’s available on Github or through the developer portal.

Got a question about the SDK? Get help in the SDK support channel on our Discord.

One ambitious development that would generate a lot of utility for Polymesh and the ecosystem as a whole would be a cross-chain settlement engine.

Technically, it’s not possible to trustlessly or atomically transfer assets from one blockchain network to another, at least not in the same way that assets can be transferred from one user to another on the same blockchain. That’s because each blockchain exists in its own network; you can’t connect them directly.

Chain interoperability is what’s behind bridges like the POLY to POLYX Upgrade Bridge, which permits token holders to convert their ERC-20 POLY tokens on Ethereum to POLYX on Polymesh Mainnet.

Developers looking to tap into utility on Polymesh could increase chain interoperability by building a similar bridge that allows users to swap assets between any non-Polymesh blockchain and Polymesh.

The cross-chain settlement process could apply to any chain, but let’s use Ethereum as an example.

In this case, the bridge would be from Ethereum (or an EVM chain) to Polymesh and would wrap Ethereum assets to settle against Polymesh native assets. This would entail locking ETH (or any other native Ethereum asset) on Ethereum in a smart contract and minting a wrapped Ether token on Polymesh.

Unlike the one-way POLY to POLYX bridge, the engine could be built to enable two-way transfers, so that assets redeemed on Polymesh could then be unlocked on Ethereum.

Another aspect we (and others we’ve spoken to) find exciting about a cross-chain settlement engine is where an exchange could use this to trade assets on one chain or in an off-chain infrastructure and use Polymesh to net trades as the golden source of truth every hour, day, or week. With this, Polymesh could become the go-to chain for settlement.

What would building one entail?

If you’re planning on bridging from Ethereum, you’d need to know Solidity to write a smart contract on the Ethereum side. You’d also need to know how to create a relayer on the Polymesh side that can mint the new asset, or burn it as it leaves.

Why should you build one?

Increasing chain interoperability via a bridge would bring immense utility to Polymesh and help widen its ecosystem. This not only helps Polymesh but also the blockchain space as a whole, since it’s beneficial for blockchains (and the applications built on top of them) to be able to interact with each other, especially given the industry’s crazy growth.

From an investing perspective, it would also help bring greater investing flexibility and can help open assets to a wider pool of investors.

That said, building a cross-chain settlement engine is quite a large development. It’s been done in bits and pieces, but would likely require a lot more effort to put together compared to development projects like a block explorer. Still, since whoever maintains the bridge would be able to gather fees, it could prove very economically rewarding!

Just as there’s no shortage of possibilities as to what can be tokenized on Polymesh, options for future innovation on the blockchain are endless and extend beyond its original use-case of security tokens.

We might be a bit early pitching this one as non-fungible tokens (NFTs) aren’t yet possible on Polymesh, but it would be exciting to see NFT infrastructure built on Polymesh– and since NFTs are set to be implemented in 2022, it’s not out of the realm of possibility for the future!

Eventually it might even be possible to build an NFT marketplace, where individual users can mint NFTs on Polymesh.

Unfortunately, eager developers will have to wait to hear more about what exactly building NFT infrastructure on Polymesh will entail; we’re implementing smart contracts first (they’ll hopefully be on testnet in Q2 2022).

Here’s why we think you might want to consider Polymesh for NFT infrastructure (or any other use case, really):

Interested in building one of the above developments on Polymesh? Contact us with your project details so we know how to help, and remember to apply for a grant through Github if you'd like to apply for POLYX funding.

If these projects sound a little daunting, don’t worry! We have a list of RFPs for less-intensive features and functionality we’d like your help building first (plus information on various resources and parts to get started).