← Back to blog posts
The blockchain
July 5, 2022
Link copied to clipboard

Why public permissioned isn’t a contradiction

Here we explain what we mean by public permissioned blockchain, outlining a new framework for blockchain classification while emphasizing the importance and advantages of decentralized governance. 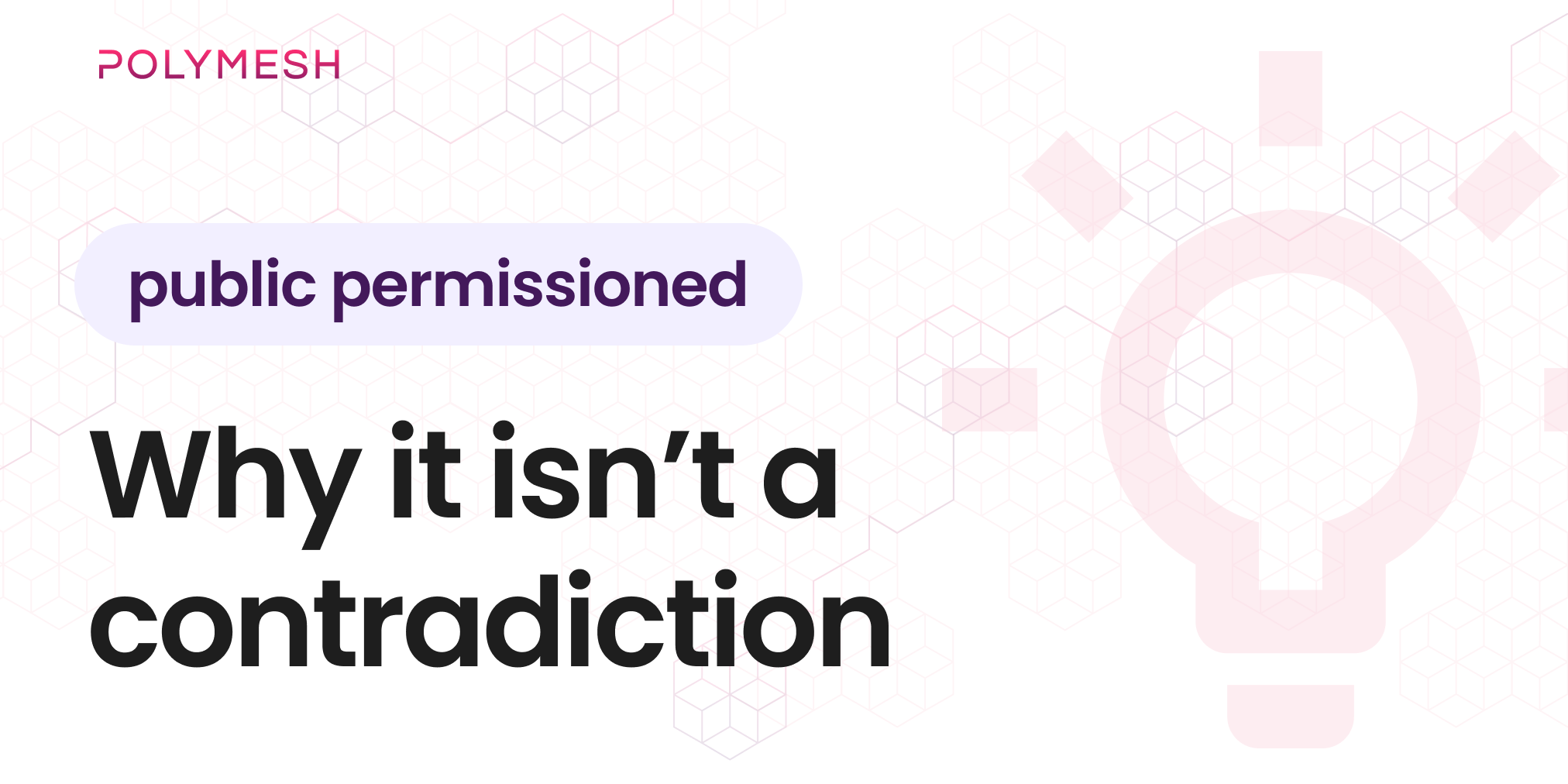 When it comes to blockchain terminology, the waters become a bit murky. We like to call Polymesh a public permissioned blockchain, but for those just dipping their feet in the technology, it’s not always clear what this means.

Partly, this is owing to the limits of traditional blockchain taxonomy. Unfortunately it hasn’t quite caught up to the technology yet, and there’s a lot floating around that mistakenly conflates the term permissioned with private, implying that permissioned blockchains can’t be public.

Polymesh is one example of a new kind of blockchain that’s emerging and challenging this conceptualization: a public permissioned blockchain.

In this blog post, we’ll explain what we mean by public permissioned blockchain. In the process, we’ll outline a new framework for blockchain classification, and discuss the importance of decentralized governance.

Historically, blockchains have been classified as either public or private.

Most existing literature cites public blockchains as open networks that commonly let everyone participate in transactions and consensus. By contrast, private blockchains provide a closed ecosystem, only permit entry of verified participants, and predetermine which nodes may validate transactions.

The essence of a permissioned blockchain

What constitutes a permissioned blockchain? Essentially, it’s just a blockchain with a control layer that permits participants’ entry to the network and grants them permissions to perform specific actions.

Putting the public in public permissioned

Let’s take a moment to focus on the word public and how we should apply it to the blockchain space.

Typically, a public blockchain is understood as one which is open to everyone. If that’s the case, nothing prevents a permissioned blockchain from being public, even if it has identity criteria to join. The important thing is just that this criteria isn’t a barrier for entry and participation.

A helpful comparison taken from Jesús Ruiz’ paper ‘Public-permissioned blockchains as Common Pool Resources’ is with public services. Most public services (e.g. public healthcare, public education) require citizens to identify themselves before accessing them, but there are no artificial barriers for entry. Rather, identification is required to ensure inclusion, fair access and usage, and sustainability.

Arguably, you could say public services are permissioned systems and that this permissioning is in fact what enables them to operate in the best way. Public permissioned blockchains are similar. They’re non-discriminatory and everyone has the right to join; they just have to identify themselves first. This brings a range of benefits, including improved efficiency, easier compliance, smoother operations, and lower costs (discover the benefits here).

The importance of a decentralized governance model

With a centralized model, there’s always a risk associated with network trust. That’s because one entity or a cartel of entities controls who is allowed to participate, execute consensus, and maintain the ledger (including the writing and re-writing of entries on the chain and the blockchain’s protocol rules).

Taking our cue from Ruiz, public permissioned blockchains can be characterized as guided by two principles:

Ruiz’ model takes public to mean inclusive. However, in order to truly merit being called inclusive, the blockchain has to be open to everyone not only in practice but also in theory. That’s where the decentralized governance model comes–it helps to remove barriers to entry.

For Polymesh, inclusivity looks a bit different. As a blockchain for regulated assets, there needs to be a more robust barrier to entry than simply providing some identification. We’ve spoken before about the importance of permissioning on Polymesh and how it protects users from participating with terrorist organizations or individuals/jurisdictions on OFAC blacklists. It’s inevitable that not all users who apply to Polymesh onboarding will be accepted.

There are many nuances when it comes to how decentralized governance is implemented on a blockchain and the mechanisms that enable it to fulfill these two principles. Below we’ll look at Polymesh, but it’s only one example.

It’s important to note that for many use cases and especially for securities, there’s an optimal point of decentralization where any more will be harmful (more on that here). Our goal below won’t be to show that Polymesh is fully decentralized, but to show that it’s decentralized where it matters.

Let’s now examine how Polymesh maps onto the two principles we just outlined.

To begin, Polymesh is open for nearly every individual or legal entity to become a user or run a regular node. The onboarding process only checks that the individual or entity exists by checking for a verified identity through a know-your-customer (KYC) or know-your-business (KYB) process and cross-referencing common anti-money laundering (AML) lists.

Node operators must meet the additional criteria of being licensed financial entities. This limitation exists to make Polymesh fit for regulated assets, and ultimately ensures the chain’s sustainability. This is quite reasonable, especially since it doesn’t preclude non-financial entities from participation in the chain as users.

Further, individual users who themselves might not be able to operate a node still have a voice when it comes to choosing new node operators. That’s because node operators on Polymesh are permissioned through a democratic governance process, as are new CDD providers.

What makes Polymesh’s governance democratic? Every user has the right to participate by submitting a Polymesh Improvement Proposal (PIP) through Polymesh Governance or by voting on PIPs submitted by others. The only thing they need is POLYX.

A key feature of Polymesh governance is that it’s on-chain. This means some governance rules are programmed into the blockchain, making the enforcement of these rules transparent, automatic, and unable to be modified unilaterally. This makes the chain compatible with regulatory needs and significantly reduces the risk of hard forks, providing a strong governance system that’s still very much inclusive towards stakeholders.

Polymesh is also open as a technology. The Polymesh Association is responsible for promoting and developing Polymesh and the ecosystem, but a huge part of this mission focuses on fostering community development.

Anyone can build features and functionality on Polymesh– it’s all open-source, and there are tons of great resources available to get started (see Github or the developer portal). Polymesh Association also has a Grants Program offering grants in POLYX to incentivize developers for which cost might be an issue. Individuals or entities are also to apply for membership in the Association itself.

Finally, while designed for regulated securities, the future of Polymesh is wide open. There are virtually no limitations on what decentralized applications could be built on top of it, the services which could be integrated, or the types of sectors which might eventually utilize the chain.

And there you have it! Our long-winded explanation as to how Polymesh can be both public and permissioned.

Keen to continue reading about public permissioned blockchains? Check out our explainer, discover their benefits, or dive deeper into why Polymesh is permissioned.