← Back to blog posts
Learning
July 26, 2022
Link copied to clipboard

Take a look at a few token types that might find their way to Polymesh in the future, including crypto and NFTs, and the possibilities for DeFi products and protocols that these tokens bring. 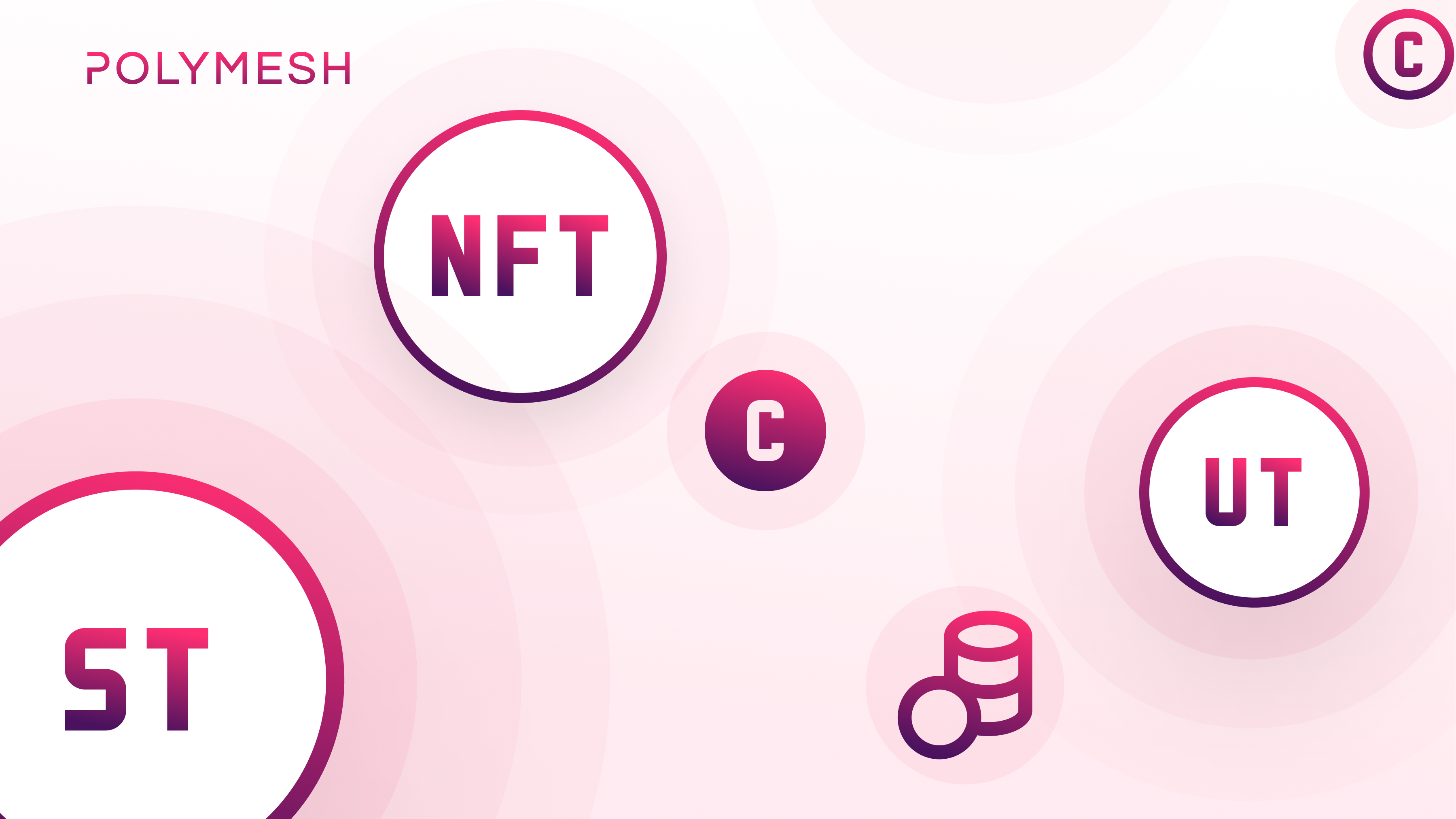 Polymesh might have been designed for security tokens, but its use-cases aren’t limited to what falls neatly into the category of “financial securities”.

Any token can be created on Polymesh, whether crypto, security tokens or other asset-backed tokens, utility tokens, non-fungible tokens (NFTS), governance tokens, reward tokens, work tokens, or any other token types conceivable.

Polymesh provides the underlying blockchain infrastructure, but the possibilities for what can be built on top are endless. Especially when smart contracts are implemented– the world will really be your oyster for building innovative DeFi products and protocols on Polymesh, from DAOs to liquidity pools.

In this blog post, we’ll take a look at a few examples of token types which will find their way to Polymesh in the future: crypto tokens, utility tokens, and non-fungible tokens.

What is a cryptocurrency?

A cryptocurrency is a blockchain token intended for use as digital currency. It serves as a store of value and a medium of exchange, like the national or supra-national currencies we’re used to (only it’s not necessarily emitted by a central authority, thanks to blockchain’s decentralized nature).

When it comes to distinguishing token types from each other, however, the lines are a bit blurry. Here’s why it’s complex for crypto:

Can you have cryptocurrency on Polymesh?

Yes! Polymesh can be used to create crypto, security tokens, utility tokens, or any other blockchain-based tokens.

As a blockchain for security tokens, Polymesh caters well to asset-backed tokens, which is why it makes sense to expect stablecoins (cryptocurrencies whose value is pegged to other currencies, commodities, or financial instruments) to soon make their way to Polymesh. Built to counter the risks of trading tokens backed by real assets, Polymesh overcomes the problems with governance and settlement that make these tokens difficult to offer securely on other blockchains. Its architecture and governance reduce the risk of hard forks (and the legal and tax implications that come with duplication of assets) while settlement on Polymesh ensures assets can’t be doubly-committed.

Cryptocurrencies are often traded side-by-side with security tokens on a blockchain exchange. However, there’s a crucial difference between the legal status of crypto and security tokens: only the latter is subject to securities regulations.

So, what makes a token a cryptocurrency and not a security token? It all depends on the intention of the token and the structure of the offering, and how they line up with regulations about what constitutes a security. See our blog on security token uses for more details and an overview of how securities are defined in the United States.

What is a utility token?

A utility token is a token which offers token holders utility within a blockchain’s network or ecosystem.

As to what “utility” is, it varies case-by-case. It’s expected that the existing classifications will change and narrow with further technological innovation, but at a high level, there are two major ways utility tokens provide utility to token holders:

An example of a usage token would be Polymath’s POLY, which can be used in Token Studio on Ethereum to create and issue security tokens. An example of a work token is MakerDao’s MKR, which gives token holders governance rights in the Maker platform.

Some utility tokens are hybrid tokens and provide utility both in the form of usage and work. POLYX on Polymesh is one such token: token holders use POLYX to access the blockchain’s functionalities (e.g. creating and issuing security tokens) and to participate in on-chain governance (e.g. voting on Polymesh Improvement Proposals).
‍

Can you have utility tokens on Polymesh?

Clearly, POLYX provides utility to token holders in many ways. But Polymesh can host other utility tokens too. Like security tokens, these would be tokens issued on top of Polymesh, but which provide additional benefits to token holders.

Here are a few examples of the kind of utility tokens you might see on Polymesh:

What's the difference between security tokens and utility tokens on Polymesh?

When it comes down to it, there’s no obvious difference between security tokens and utility tokens on Polymesh; from a technical point of view, they’ll be created in the same way using the same exact technology.

Many utility tokens will turn off compliance criteria, so that’s one way to potentially tell them apart. But there might be cases where free-floating utility tokens won’t be beneficial for a use-case: maybe it’s important to restrict voting rights to token holders in a certain region, or maybe the utility tokens are for fuelling a blockchain exchange that needs to comply with financial regulations.

The conceptual and functional difference should be obvious: security tokens are blockchain tokens that represent and behave like securities, while utility tokens are blockchain tokens that provide token holders with clearly defined utility in the form of usage, work, or a hybrid of both.The legal perspective on the difference is trickier because it’s guaranteed to be in flux as regulation changes, and the exact criteria will vary between jurisdictions. Since most legal frameworks were created before tokens existed and haven’t been updated to incorporate blockchain technology, there’s usually no clear outline as to what constitutes a crypto vs. security token vs. utility token.

The United States’ SEC, for example, doesn’t view utility tokens as diametrically opposed to security tokens and has no legal guidelines to distinguish them. Hence the SEC sometimes finds utility tokens to be securities, such as when the SEC ruled that utility tokens listed and traded on a digital blockchain exchange can be considered investment instruments and subject to SEC regulations.

By contrast, the Swiss financial regulator FINMA has guidelines on the regulatory framework for classifying tokens on blockchain under Swiss laws. These guidelines state tokens must comply with the regulatory requirements applicable to the relevant token category to which they belong (with hybrid tokens complying cumulatively with the requirements for each category they match):

For more on when a token can be considered a security token, click here.

What is a non-fungible token?

A non-fungible token (NFT) is a token that’s cryptographically unique and not interchangeable with any other. As tokens representing uniqueness, NFTs make useful tokens to represent assets with unique data or which can’t be replicated or replaced.

Well-known uses for non-fungible tokens include:

These are just a few of the products with unique properties for which non-fungible tokens will be useful (and could find their way to Polymesh in the future).

Can you have non-fungible tokens (NFTs) on Polymesh?

Yes! You can have non-fungible tokens (NFTs) on Polymesh.

Currently, it’s only possible to create a non-fungible token on Polymesh by creating a token for which supply = 1. Technically, this token would be unique because there wouldn’t be any copies of it in existence.

Eventually, Polymesh will be able to support non-fungible tokens that are digitally unique and inherently non-interchangeable. We plan to implement this functionality in a way that can be used beside or in combination with tokenized securities, unlocking many exciting use-cases such as tokenized securities that represent baskets of NFTs, or NFTs including rights and obligations linked to other NFTs.

For more about our plans to implement NFTs, see our roadmap.

One example of a tokenized security that’s non-fungible would be unique bonds, which are bonds issued by a company at different times with different attached conditions. Other financial products which can’t be tokenized with a fungible token are derivates or swaps, which typically represent a bilateral agreement between two or more parties to exchange cash-flows on a scheduled basis.

Both unique bonds and derivates would classify as tokenized securities even if represented with a non-fungible token, because the assets tokenized are clearly securities. But there are some cases where it won’t be so clear cut.

Fractional NFTs, for example, provide partial ownership of an NFT and might be viewed as fungible securities in the eyes of regulators. Earlier this year, the United States’ SEC was reported to be probing into NFT-issuances to see whether they could be considered security offerings, while just recently Hong Kong’s Securities and Future Commission (SFC) extended regulatory rule to NFTs that are fractionalized or structured in a way similar to investment products.

Final thoughts: blockchain and the changing nature of securities

One of the fascinating things about blockchain is its potential to change investment opportunities by creating real possibilities for previously unimaginable or impractical offerings.

A classic example is the fractionalization of fine art and real estate– things which were perhaps previously conceivable, but too costly and time-consuming to offer through manual processes until security token offerings made them possible.  But there’s a lot of excitement in completely new innovative products too, especially where non-fungible tokens meet security tokens.

In this Polymesh AMA, Polymesh Association’s Head of Strategy Chris Housser gives a fun example of something that could one day be considered a tokenized security: hockey trading cards. Currently, trading cards and the like are classified as collectible assets and not securities, but put them on the blockchain through a fractional non-fungible token offering and the opinion of regulators might differ. It all comes down to the economic realities of the token offering and how it meets regulatory criteria.

While it might be unclear which products will eventually become tokenized securities in regulators’ eyes, one thing is certain: the world of finance is changing, and it’s headed rapidly in the direction of security tokens.