← Back to blog posts
The blockchain
July 6, 2022
Link copied to clipboard

Discover the difference between traditional and tokenized securities, the benefits of tokenization, and why Polymesh is the best blockchain for security tokens. 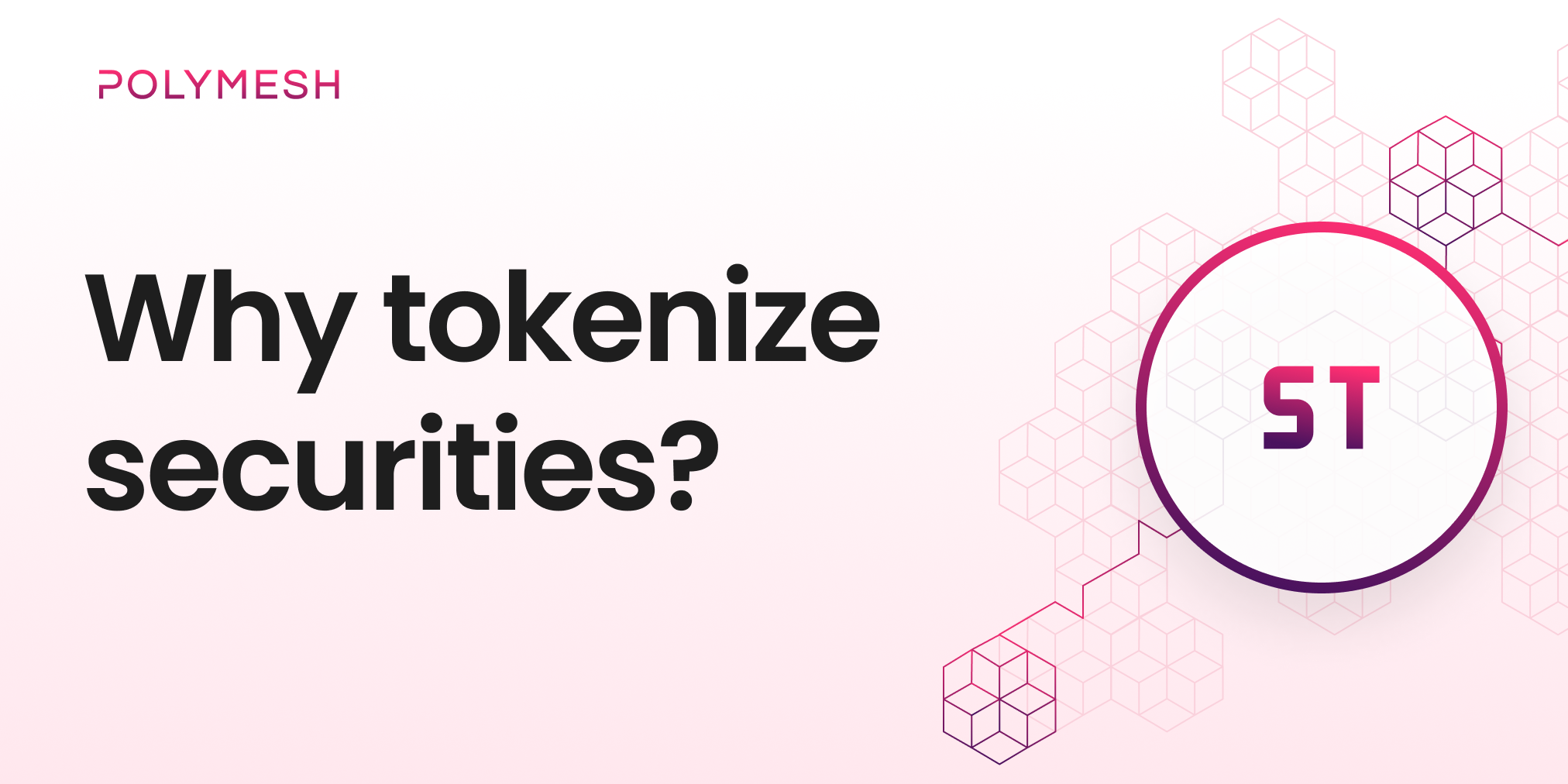 Blockchain-based security tokens are evolving and becoming an integral part of the securities market, opening up investment pools for issuers to maximize their benefits while helping investors increase portfolio diversification and invest in traditionally illiquid asset classes.

This blog post looks at the benefits of tokenized securities and how they stand to transform the existing securities market.

We’ll answer a few key questions, such as:

What is a tokenized security?

A tokenized security is a digital representation of a security on the blockchain. Common ones are bonds, stocks, and derivatives.

Tokenized securities are represented on the blockchain with a specific type of token called a security token. However, these aren’t to be confused with the security tokens used in computer access systems; blockchain security tokens are financial instruments that reside on blockchain (similar to crypto) and represent ownership stake in an asset or an enterprise.

Tokenized securities can offer all the benefits of traditional securities, such as providing token holders with voting powers or dividends. But blockchain security tokens also bring new benefits to financial markets that stand to revolutionize the world of finance: better transparency, efficiency, compliance, and market availability, among many others. We’ll discuss how and why a bit further below– or you can find a list of benefits of security tokens here.

In addition to the efficiencies and automation of blockchain, security tokens bring a number of benefits to both issuers and investors across various sectors.

One major advantage for investors is immutability. Decentralized architecturally, blockchain relies on consensus among nodes before there’s a change in the ledger, meaning (in theory) no individual entity or cartel of entities can control the network or its data. Since you can’t change a block once it’s written to the chain without consensus among validating nodes (called operating nodes on Polymesh), the ledger is immutable; validated transactions are recorded permanently, and it would take a practically impossible effort for one entity to achieve a 50% consensus among the wide number of nodes.

A public blockchain takes this benefit one step further, providing extra trust to its participants since network data is fully available and transparent. With ownership and transactions made public, investors can have confidence that there won’t be market manipulation, company deceit, or misunderstandings about who owns certain shares.

The immutability and transparency of blockchain are what enable it to be the golden source of truth for asset ownership. This has many secondary benefits to the entire securities lifecycle, from reducing room for human error or manipulation to smoother record-keeping and reporting.

Here are a few other key benefits of tokenized securities:

Can security tokens be traded?

Yes! Like traditional securities, tokenized securities are designed to be traded. As mentioned above, security tokens are even available to trade 24/7 with no time limits, increasing liquidity in the market.

Residing digitally on blockchain, security tokens can also increase liquidity by making the market more accessible to global trade. As a result, tokenized securities can bring increased portfolio diversification to investors, while businesses or enterprises can leverage security tokens to extend investment opportunities beyond the deep-pocket or elite.

What is a tokenization platform?

A tokenization platform is a platform that individuals or entities can use to issue and manage security tokens instead of plugging into the blockchain’s code directly themselves. They’re an attractive alternative for those who don’t feel comfortable working with code or for companies which don’t have the developer resources to dedicate to the process themselves.

Blockchain and security tokens bring extensive opportunities for issuers looking for a wider pool of investors across state borders while providing investors’ with more opportunities for portfolio diversification through tangible investments in digital assets, whether they be tokenized securities or new asset classes.

Still, it’s important to understand how to issue security tokens in a way that’s safe, compatible with compliance and other financial market needs, and not overly complicated.

This is where Polymesh comes in.

(We might be biased, but) Polymesh truly is the best blockchain for security tokens on the market. That’s because it was built specifically for regulated assets, unlike other blockchains which were built exclusively for crypto or a general purpose.

Purpose-built for security tokens, Polymesh solves the problems with public infrastructure around governance, identity, compliance, confidentiality, and settlement– what we call the ‘5 key pillars’. You can read about the 5 key pillars here.

At Polymesh, it’s our goal to ensure you have a successful tokenization process. Here a few other blogs that can help you understand why Polymesh is the best blockchain for security tokens and how you can get started: